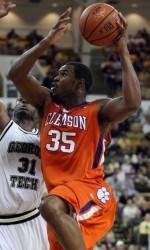 QUICK FACTS  Starting point guard Demontez Stitt will not play Tuesday, as announced by Head Coach Oliver Purnell. He played through a sprained left foot in losses to Georgia Tech and Duke.

 Clemson Head Coach Oliver Purnell has 47 victories against ACC opponents. One more will move him into second place in Clemson history. He is currently tied with former Tigers coach Bill Foster (1975-84). Cliff Ellis holds the record with 59 ACC wins in his 10 years in charge of the program.

 Trevor Booker has averaged 20.2 points and shot 63 percent over his last five games. Booker is the leader among active ACC players in career double-doubles (28), rebounds (957) and blocks (232). He is third in scoring (1557). Booker is now eigth in Clemson history in scoring, fourth in rebounding, fourth in blocked shots and sixth in field goal percentage.

 When Booker starts at Boston College on Tuesday he will break Greg Buckner’s streak for consecutive starts. Buckner started all 122 of his career from 1994-98. The Clemson record is 130 by Cliff Hammonds from 2004-08.

 C.J. Spiller was named ACC football Player of the Year in the first semester of this academic year for his all-around performance on the field and Clemson forward Trevor Booker is a candidate in basketball for the same reason. Booker is in the top 10 in the ACC in scoring, rebounding, field goal percentage, blocked shots and steals. He is the only ACC player in the top 10 in all of those categories. Clemson has never had the ACC MVP in football and basketball in the same year.

 Clemson had its sixth home sellout for the Duke game on Jan. 23. Clemson has just five home games left and four of the five are sold out.

 Clemson is coming off consecutive losses for the first time all year, but both were to top-20 teams in Georgia Tech and Duke.

 Clemson has a 3-3 ACC record. It has had to play four games against top-25 teams within the first six league games. Clemson does not play a team in the current top 25 in any of its next eight games.

 Clemson and BC will meet for the second time in 17 days, the quickest second game in a season ACC series since last year vs. Virginia (16 days).