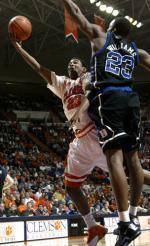 CLEMSON, SC – The Clemson men’s basketball team picked up an 86-45 victory over Carson-Newman College in exhibition play at Littlejohn Coliseum. Saturday’s game was the Tigers’ opener against outside competition, and Clemson’s only exhibition game of the 2004-05 season. Clemson will open its regular season on Friday, Nov. 19, as the Tigers play host to Hampton University in an 8:00 PM tipoff.

Clemson’s balanced offensive attack was led by Shawan Robinson, who scored 16 points on 6-9 shooting from the field, including 4-6 from outside the arc. Sharrod Ford was 6-8 from the field for 14 points, and added five rebounds and five blocks in only 19 minutes of play. Akin Akingbala hit 4-8 shots from the field, and was 5-6 from the free throw line to add 13 points with a team-high four steals in 18 minutes of playing time.

Rookie Cheyenne Moore added 10 points with six rebounds and two blocked shots in 20 minutes, while freshman guard Cliff Hammonds had seven points and seven rebounds with six assists and three steals in 24 minutes on the court. Vernon Hamilton and Olu Babalola added nine points each, and Hamilton handed out five assists with no turnovers in 25 minutes of play.

Carson-Newman was led by Corey Young, Braun Dabbs and Darren Williams who scored eight points each. Dabbs handed out a team-best four assists, and Rodrick Gresham had a team-best seven rebounds.

Clemson dominated the first half as the Tigers scored 43 points to the Eagles’ 16 points. The Tigers held the Eagles to just 12 points until the last 55 seconds when Carson-Newman tacked on four points off a jumper and two free throws by Andy Tipton. Robinson led Clemson in first-half scoring with eight points, while Ford added seven points and three blocks.

In the second half, the Tigers added to their lead with a 13-4 point run over the first five minutes of the second period. As Clemson continued to play tough defense, Carson-Newman cut the lead to 32 points with 8:39 left to play. The Tigers responded with an eight-point run to build the lead to 40 points.

Head coach Oliver Purnell praised his team’s intensity and ball distribution. “I feel good about the way the team played today. This was the first time for the team and for the freshmen to play under the lights and we came out strong and then continued to build on that initial lead. I really liked our ball distribution which led to 23 assists as well as our defensive play. The guys worked hard defensively, shared the ball and allowed the game to come to them. It was good to get everybody a lot of work and to see that the team’s intensity did not slip in the second half despite the lead.”