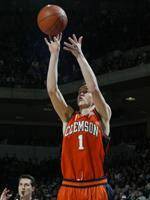 Clemson’s Julian Betko has announced his intentions to transfer to another institution either this month or at the conclusion of the 2003-04 academic year. The sophomore guard from Ruzomberok, Slovakia, has asked for and been granted permission to explore other opportunities to continue his athletic and academic career. Betko has met with head coach Oliver Purnell several times in the last few weeks and said that he and Coach Purnell agreed that it would be best for him to continue his athletic career with another Division I basketball program.

Clemson head men’s basketball coach Oliver Purnell stated, “Julian has decided that he wants to investigate other opportunities to continue his collegiate basketball career. The main issue involved in his decision is playing time, and I understand his feelings and will help him in any way possible.”

As a freshman in 2003, Betko played in all 28 games for the Tigers, scoring 54 points with 23 rebounds and 15 assists. He has played in only one game this season, against in-state rival South Carolina. Off the court a year ago, Betko was named first-team Academic All-ACC for basketball and was a member of the ACC and Clemson Academic Honor Rolls.