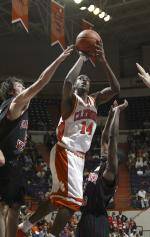 Clemson’s Chey Christie has announced his intentions to transfer to another Division I institution at the conclusion of the 2003-04 academic year. The junior guard from Hartford, CT, has asked for and been granted permission to explore other opportunities to continue his athletic and academic career.

Clemson head men’s basketball coach Chey Christie approached me about wanting a release because he wanted a fresh start at another institution. After discussing the matter with him, I concluded that he had given this a lot of thought and made up his mind. I wish Chey nothing but the best in his future.”

Christie completed his third season with an 8.5 career scoring average and a 2.2 rebounds per game average in 86 games for the Tigers. He owns a .394 (256-650) field goal percentage and has connected on 67 shots from beyond the three-point line. Christie has dished out 155 assists in the last three seasons.

As a junior in 2003-04, Christie started in 26 of the Tigers’ 28 games and scored in double figures in 10 games. His season-high 24-point performance came against Georgia at the Peach Bowl Classic, a game in which he scored 15 consecutive points to tie a Clemson record. He had 11 points, including three of four on three-point shooting in Clemson’s victory over 12th-ranked North Carolina on Jan. 31. Christie finished the season with a 9.1 points per game average and a .406 field goal percentage. In his third year, he hit 31 of 87 shots from outside the arc for a .356 shooting percentage.

During the 2002-03 campaign, Christie recorded a career-best 25 points in a February win against Georgia Tech at Littlejohn Coliseum. In that game, he was nine of 15 from the field, including three of six from beyond the arc, with five rebounds and three steals. He finished the 2003 season as the Tigers’ second leading scorer with an 11.5 average, doubling his scoring average from his freshman year. Christie posted double-figure points in 17 games as a sophomore and averaged 31.6 minutes per game.

Christie had his best game of the year as a freshman on Dec. 2 when he scored 21 points on seven of eight shooting against then #1-ranked Duke. He scored 13 straight points in that contest and was named ACC Rookie of the Week for that performance. Christie also scored 16 points against Penn State, and hit all three of his three-point attempts.