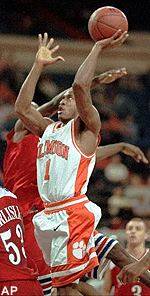 “This honor is a credit to Will’s hard work and the hard work of his teammates,” said Head Coach Larry Shyatt. “Will has been outstanding all season, even when the opposition made plans specifically to stop him. Being selected to this team as a sophomore speaks well for our future.”

“I want to first thank my teammates,” said Solomon, who improved his scoring average by nearly 15 points a game this year over his freshman year. “I could not have accomplished anything without their hard work on offense and defense. This is a great honor and I want everyone to know that I appreciate being selected to this team. It is something every ACC player strives for.”

Solomon, a native of East Hartford, CT, leads the ACC in scoring with a 21.1 average, the highest by a Clemson player in 30 years. He also paces the conference in three-point goals per game (3.1) and is 10th in assists (3.1) and fourth in three-point goal percentage (.372).

He has had 12 games of at least 25 points this year, including a 43-point outburst against Virginia on January 15 that was the highest scoring game by an ACC player this year. Solomon has scored 32.73 percent of Clemson’s points this year and is trying to become the first ACC player in 30 years to score a third of his team’s points over the course of the season.