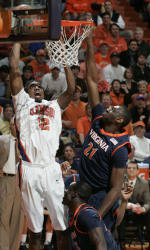 What started out as a “bet you won’t cut your hair first” friendly wager with a friend has turned into a “dreaded” Clemson basketball trademark. Raymond Sykes won the bet, and now is one of the most easily recognizable athletes on Clemson’s campus. Aside from his hair, he has accomplished many other things during his four years at Clemson that have made him stand out on the basketball court.

Basketball was not the sport that Sykes originally wanted to play. When he was younger he played football, but after getting into trouble, his mother made him quit football and join his church basketball team. Ever since then it has been all basketball, all the time, and he has strived to be the best he can be.

“I have really pushed myself to get better,” Sykes said. “I wanted to prove to everyone that I could do this and be good at it.

“It has definitely kept me in school, too. I have to keep my grades up to play, so I study harder and do my best in school so I can keep playing. I want to take basketball as far as I can, so the next step from high school was college, and then after that I want to play professionally.”

Getting to play at Clemson has allowed Sykes to continue his journey toward success at basketball, and having Head Coach Oliver Purnell as a mentor has equipped Sykes with the tools that he needs to extend his basketball career.

“He has taught me so many things while I have been here. He has a great basketball mind. He has also helped me off the court, in terms of getting my priorities together.”

Sykes, a 6’9” 220-pound senior, came to Clemson from Jacksonville, Florida and became the first scholarship basketball player to be signed from Jacksonville. There were a lot of things about Clemson that enticed him to pursue a basketball career, including an odd connection between him and Purnell.

“We have similar families; his mom and my mom both have the same jobs, and his dad and my dad have the same jobs. We were able to relate to each other because of it. I also really liked Clemson’s campus and all of the people here. I got along well with K.C. Rivers and Julius Powell right away, as well as many of the other players on the team.”

He began his career at Clemson with limited roles coming off the bench, but has grown into an important part of the basketball team in the last two years. Each season his playing time has increased, eventually earning him a starting role for the 2008-09 season. As a freshman, he averaged 6.9 minutes, which rose to 10.8 as a sophomore, 14.5 as a junior, and 22.1 so far as a senior.

With Clemson’s full-court style of play, there always needs to be a guy that can bring a lot of energy and intensity to the court, and Sykes has become that guy. During the 2007-08 season he had the opportunity to step up and prove himself when a key senior went down with an injury. When starting forward James Mays was out with a hip injury, Sykes stepped into the starting position and the Tigers posted a 5-1 record during that stretch.

“In my junior year I had to score a lot more with Mays going out. I was able to bring a lot of intensity to the floor, and was able to continue to get blocks and rebounds.”

With his long, lean frame, Sykes makes an excellent shot blocker. Over the past three seasons he accumulated 70 blocks and so far this season has added 31, making him an important presence inside for the Tigers. Sykes has a total of 101 blocked shots for his career, which puts him eighth all time in Clemson history. He has also been a big reason that Clemson has ranked in the top 10 in the nation in blocked shots per game each of the last two seasons.

Sykes can bring that same intensity to the offensive side of the ball as well. He is averaging 7.8 points per game this season, which is up from his average of 4.4 last season. He can be most intense and impressive on the inside plays resulting in dunks, one of which made the number one play on ESPN’s SportsCenter earlier this season in the Tigers’ road win over South Carolina.

His role on this team has helped lead Clemson to a very successful four-year stretch. The Tigers have a 91-40 record in the four years that he has been part of the program. Sykes has played in 85 of those victories, making him the second winningest player in Clemson history, with Rivers being first.

“It is a really great feeling, I can’t even describe it,” Sykes explained. “There have been a lot of great teams to play here at Clemson, and it is an honor to be among those players.”

Sykes, along with fellow senior Rivers, will look to lead this Clemson team to another appearance in the ACC Championship game and the NCAA Tournament. After his collegiate career comes to a close, the Clemson faithful will look for Sykes in the pros, but Littlejohn will surely miss the dreads and dunks from number 12.