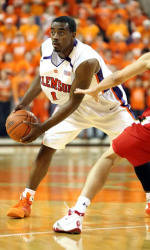 There are different types of leaders. Some prefer to lead with encouraging words, while others choose to lead by example. For Clemson senior forward K.C. Rivers, being a leader meant striking a balance between the two.

Rivers has led by example ever since he arrived on campus at Clemson in the fall of 2005. He has led the Tigers in scoring in each of the past two seasons and is currently second on the team with an average of 14.4 points per game. Rivers also puts every bit of his 6’5″ frame to use crashing the boards, as his 5.2 career and 6.3 season rebounds-per-game averages suggest. He went over 700 career rebounds in the game at Florida State and is Clemson’s career rebound leader among players 6-5 and under.

Rivers has taken care of the basketball at a high level as well. He is aiming to become just the second player in Clemson history to finish his Clemson career with more steals than turnovers; currently, Rivers has 203 steals in his Tiger tenure and only 168 turnovers. In addition, he has had a positive assist-to-turnover ratio in all four years he has been a student-athlete at Clemson.

Rivers’ poise under pressure may be his greatest asset, and his leadership by example is undeniable. But after losing seniors Cliff Hammonds, James Mays, and Sam Perry following last season, Rivers realized that he needed to do more. His progression as a vocal leader may be hard to notice on the floor, but he insists that his abilities as a leader have expanded.

“It’s just being motivational and being a pusher, continually saying something when you know they don’t want to hear it,” the All-ACC candidate said. “I’m still going to keep saying it over and over again. You might not see me saying it, but I’m out there saying something, you can hear me saying something. I’m telling them, `Alright, let’s see what you’ve got, come on, let’s pick it up.’ There are just little things that I say, and guys probably get tired of hearing them, but it’s my job.”

It has been a long road for Rivers, from his freshman season at Independence High School to becoming one of the most productive players in Clemson history and one of the most consistent players in the Atlantic Coast Conference. Rivers grew up in Charlotte, right in the middle of ACC country, and he always dreamed of being able to play in the conference he grew up watching.

“I thought I would play in the ACC, I just didn’t think I would be at Clemson,” the all-time winningest Tiger said. “My dream has always been to play in the ACC. I’ve grew up a Duke fan. Fortunately, we’ve been able to beat them the last two games. Everything that I thought about happening has been happening so far; it’s just been a dream come true.”

After two years at Independence, Rivers decided he needed some new mountains to climb in his basketball career. So he relocated to Virginia and enrolled at Oak Hill Academy, where he played alongside such talented players as North Carolina point guard Tywon Lawson, Syracuse guard Eric Devendorf, and current NBA stars Josh Smith, Rajon Rondo, and Kevin Durant.

“My sophomore year of high school, I had to do pretty much everything,” Rivers said. “But, I wanted a bigger challenge; it was nothing against playing in Charlotte, but I needed a bigger challenge in order to get where I wanted to go. I needed somewhere to prepare me for the next level, and Oak Hill was the place. Steve Smith is one of the greatest high school coaches out there, and I played for him.

“The excitement up there that we had, the energy that we played with, the bond that we had–there was nothing up there, it was pretty much us and 70 or 80 other students there at this small school. But when basketball season rolled around, everybody was excited about it. We were the buzz, we were the number-one team in the country. We went through everything just like a college experience.”

Even being at a national powerhouse like Oak Hill, which won back-to-back national championships in his two seasons there, did not get Rivers a lot of national attention from major Division I colleges during the recruiting process. Many of the more prestigious programs backed off due to a broken foot he suffered during his senior season. He chose Clemson over N.C. State, Tennessee, Virginia, Wake Forest, and hometown Charlotte. Rivers cites Oliver Purnell’s concern for him during his injury as a key factor in his decision.

“When I got hurt my senior year, he came to the hospital in Charlotte to meet me after I had surgery,” Rivers said. “The first thing he said was, `I still want to honor your scholarship. I’m looking forward to coaching you as a player.’ That’s a sign of good character; Coach Purnell really showed me and my family that he cared for us for more than just basketball.”

Rivers came to Clemson with a reputation as a sharpshooter, and he has lived up to the hype in that regard. He has hovered around the 40 percent mark for his career from three-point range and is currently Clemson’s all-time leader in three-pointers made in his career. But throughout his tenure, he has developed into an all-around player that does not need to rely on the jump shot alone.

“My freshman year, I was coming off of an injury and I was still uneasy about doing things with my ankle,” the Tiger senior said. “I wasn’t too sure, so I tended to fall in love with the jump shot because I didn’t want to put myself in a position where something like that could happen again. That’s typically the mind frame of people who injure themselves like that. It shakes them up a little bit.

“My sophomore year, I started losing that mindset and getting back to just playing ball. It’s just kept going and going, and it’s developed into now being a well-rounded player.”

When he arrived at Clemson, the basketball program did not carry much weight on the national scene. Now, as a senior looking back, Rivers can say that he witnessed the complete turnaround of the Tiger program, both in the product on the floor and in the perception of the program both locally and nationally. The Tigers have been ranked in each of the last 12 polls and in 21 of the last 34, including the program’s first final top 25 ranking in 11 years last season.

“My freshman year, I think maybe we sold out for one or two games, and we usually would get 5,000 or 6,000 on a good day in the stands,” Rivers said. “Now, we’re pretty much selling out every game. The biggest thing I can take away is that I did what I said I wanted to do. I said I wanted to go somewhere less productive and make it productive, and I did that. I can check that off my list.”

As Rivers has transformed himself as a leader, he has been able to articulate what it means to be successful in the Atlantic Coast Conference to a freshman class that has contributed significantly this season. He relishes the opportunity to pass the lessons he has learned over the years on to guys like Tanner Smith, Andre Young, Bryan Narcisse, and Catalin Baciu so that the program can continue the steady growth that Rivers has seen. But he understands from his own experience the need for the younger players to learn to conquer the challenges of a college basketball season on their own.

“I try to let them see things for themselves because that’s what I went through,” the Clemson captain said. “I saw the level of competition, I saw the level of play, I saw the types of atmospheres that I was going into. I saw a lot of things my freshman year, and I went through a lot. Being a freshman is tough on you. It wears and tears on you a little bit, and I wasn’t fully mentally prepared for it. Those guys are getting a full experience–being on a ranked ballclub, having a chance to go to the NCAA Tournament for the first time.”

As his career winds down, Rivers can look back and be proud of what he has accomplished. He has managed to lead Clemson’s basketball program to national prominence, he has experienced the ups and downs of a brutal conference schedule, and he has had an opportunity to participate in the NIT and the NCAA Tournament. Now he gets a chance to soak in all in when the Tigers host Virginia on Senior Night.

“I’m not a big crier; I might shed a tear, I don’t know,” Rivers said. “It depends on how hard it hits me. I’m sure the fans are going to be very emotional, I’m sure Coach Purnell is going to be emotional. I’ve seen him emotional for three other Senior Days.

“It’s going to be sad to play my last game in Littlejohn two days after my birthday. It’s just something I have to get prepared for mentally. It’s been a great ride; I can think of memories of everything from day one since I stepped foot on campus until now. However it comes, I’m going to have to prepare myself.”