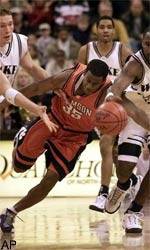 The Demon Deacons (14-3, 3-3 ACC) extended their home winning streak to 13 games while beating Clemson for the fifth straight time, and 18th in the last 22 meetings.

Will Solomon, who leads the ACC in scoring at 21.6 points a game, led Clemson with 30 points.

But he picked up his fourth foul on Clemson’s next possession, and was not as aggressive as he had been. As a result, the Tigers only scored once more, on his Solomon’s free throws with 23 seconds to play.

It was too little too late for Clemson, which lost for the fourth time in its last five games.

Josh Howard had 16 points and a season-high 10 rebounds for Wake Forest. Howard’s offense picked up the slack for Wake’s four other starters, who combined to score just 21 points.

Robert O’Kelley was held to six points for the second straight game, shooting 2-for-9 for the game. He did hit his first 3-pointer in three games, but stretched that drought to 1-for-17.

That created more playing time for Hicks, a reserve who shot 6-for-9 from the field. He combined with Howard to score 16 points in Wake’s 23-5 first-half run that gave the Deacons control of the game.

Trailing 22-13 with 10:36 to play in the first half, Hicks hit consecutive 3-pointers and scored on a catch-and-shoot during the run. Howard then scored on a layup, O’Kelley hit his only 3-pointer, and Hicks and Howard closed the run with six straight free throws to make it 36-27.