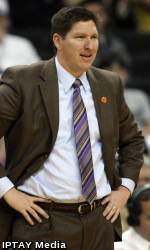 Team Notes  Clemson concluded the 2011-12 season with a 16-15 overall record, the program’s eighth straight season with at least a .500 overall record.  The Tigers did not compete in a postseason tournament for the first time since 2003-04. The eight straight years competing in the postseason was the longest streak in school history.  Clemson finished the regular season 8-8 in the ACC, the fifth straight season the Tigers were .500 or better in conference play. It is the longest streak of break even seasons in Clemson’s 58 years in the Atlantic Coast Conference.  The Tigers defeated three teams that advanced to the NCAA Tournament (Florida State, NC State and Virginia), all at home.  The Tigers won five of their last seven ACC games to reach .500 after starting 3-6 in league play.  Clemson won as many ACC regular season games (8) as it did during the non-conference portion of the schedule. It marked the first time since 1974-75 that the Tigers had the same number of wins in non-conference and ACC games. That year, Clemson actually won 17 games, but the final win was against Duke in the ACC Tournament, so the Tigers won eight games out of conference and against ACC teams during the regular season.  Clemson defeated No. 22 Virginia at home, 60-48, on Feb. 14. The Tigers shot 54 percent in the second half to give the program a win over at least one ranked opponent for a fourth straight season.  The Tigers were 2-0 in overtime games, which included an 83-75 win over Southern Illinois after trailing by nine in the second round of the Diamond Head Classic in Hawaii.  The other overtime win for the Tigers was a 72-69 triumph over NC State after Tanner Smith’s free throws tied the game with 4.1 seconds left, and Andre Young made his final two three-point attempts in overtime to erase a three-point deficit.  Clemson defeated eventual ACC Tournament champion Florida State by 20, the Seminoles’ largest margin of defeat. The win was the Tigers’ 10th in the last 11 meetings with the Seminoles at Littlejohn Coliseum.  The Tigers snapped an 18-game losing streak at Wake Forest’s Lawrence Joel Coliseum. Prior to this season’s 78-58 win, Clemson’s lone win in the facility came in 1990, its inaugural year.  Clemson swept two ACC opponents for the second straight season, Georgia Tech and Wake Forest. In fact, it was the second straight sweep over the Yellow Jackets.  The Tigers defeated Iowa on the road in November by a score of 71-55 to improve to 9-4 all-time in the Big Ten/ACC Challenge. The win was Clemson’s fourth straight on the road in the challenge, a first by any school in either conference.  Clemson was second in the ACC in scoring defense in 2011-12, yielding just 60.6 points per game to the opposition. That was the second-best figure by a Clemson team since 1950.  The Tigers committed just 12.1 turnovers per game, the third-best figure on record at Clemson.

Head Coach Brad Brownell Notes  Brad Brownell became the first coach in Clemson history to achieve a .500 record or better in the ACC in his first two seasons.  Brownell won his 200th career game as a Division I head coach on Jan. 28, 2012 with a 71-60 win over Wake Forest.  Brownell’s two teams own the top scoring defenses at Clemson since 1950. This year’s team yielded just 60.6 points per game, one of the top 30 figures in the nation.

Individual Player Notes  Tanner Smith’s was named to the Fan’s Guide All-Defensive Team. The two roommates and senior leaders tied each other for the season with 52 steals.  Young finished his career third in Clemson history with a 2.1 assist-to-turnover ratio. He had 342 assists and 163 turnovers during his four years with the Tigers.  Young had 184 career steals, placing him seventh in the Clemson record books. Smith had 159 steals, good enough for 11th place all-time in school history.  Young made 236 career three-point goals, fourth-most in Clemson history.  Young finished his career with 1,223 points, No. 25 on the school’s all-time scoring list.  Young played 3,489 minutes in his career, 12th-most in the Clemson record books.  Young was second in the ACC with a 2.36 assist-to-turnover ratio. That was also the eighth-best ratio for a single season in Clemson history.  Smith became the first player in Clemson history to average at least 10 points, five rebounds and four assists per game over the course of a season.  At 6-foot-5, Smith was the tallest player since Jeff Reisinger (6-foot-6) in 1973-74 to lead the Tigers in assists.  Smith was named to the All-ACC Academic Team for the fourth time in his career, just the second player in school history (joining Shawan Robinson) to be named to the team all four years.  Clemson had a league-high four players named to the All-ACC Academic Team. Joining Smith on the squad were Andre Young.  Smith and fellow senior Bryan Narcisse earned undergraduate degrees in December. They were the first Tigers to play with degrees in hand since Bruce Martin in 1994-95.  Trevor Booker had in any of his four seasons.  Catalin Baciu scored 68 percent of his career points (126 of 184) in 2011-12.