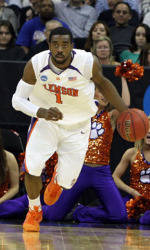 Clemson finished the year with 23 wins, tied for the fifthhighest total in school history. The .719 winning percentage ranksin a tie for fourth best in school history and the best since the1989-90 team was 24-8 for a .750 winning percentage. The 23victories gave Clemson at least 20 wins for the third straightyear, a first in Clemson history. Clemson has 72 wins over the lastthree years, third among ACC teams behind North Carolina and Duke.Clemson finished the year ranked 24th in the final Associated Presspoll. It marks the second consecutive year Clemson has been rankedin the final AP poll, the first time in history Clemson hasfinished in the top 25 in any poll in consecutive years. Clemsonwas ranked in the AP poll for 14 consecutive weeks and in the USAToday poll for 13 consecutive weeks, the second longest streak ofweeks in the top 25 in the same season in Clemson history and mostsince 1996-97 team was ranked in all 19 polls. Clemson reached ahigh ranking of #9 in the USA Today poll on Feb. 9, the highestranking for the program since the 1997-98 season. Clemson wasselected for the NCAA Tournament for the second consecutive year,joining Duke and North Carolina as the only ACC schools to make thetournament each of the last two years. It is just the third time inClemson history that Clemson has gone to the NCAAs in consecutiveyears. Clemson won 10 games away from home, including seven on theopponent’s home court. The 10 wins away from home were the mostsince the 1996-97 team won a record 11. The seven road wins werethe most since the 1986-87 team won eight on the opponent’s homecourt. Clemson had a winning ACC record in regular season play(9-7). Coupled with last year’s 10-6 ACC record, this marks thefirst time since the 1965-66 and 1966-67 seasons that Clemson hashad consecutive winning seasons in ACC play. Clemson defeated fiveNCAA tournament teams during the regular season in Duke, Maryland,Boston College, Temple and Illinois. It is the most wins over NCAATournament teams in the regular season for the Clemson programsince 1997-98. One of the wins was a 29-point victory overMaryland, the largest margin of victory in Clemson history over theTerps, and tied for the largest margin of victory for a Clemsonteam against an ACC team that advanced to the NCAA Tournament.Clemson defeated Florida State in 1997-98 by 29 points. Clemsondefeated a third-ranked Duke team on Feb. 4 by 27 points, thelargest victory margin for the Tigers against the Blue Devils since1975 and the first regular season win for the Tigers against theBlue Devils since 1997. It was the highest ranked team Clemson hasdefeated since 2001 when Clemson defeated a number-one ranked NorthCarolina team. The 27-point victory margin was the largest inClemson history against a team ranked in the top 25. Clemsonfinished the regular season with a 14-0 record againstnon-conference teams, one of just eight Division I teams with aperfect non-conference record. The others were Pittsburgh, UCONN,North Carolina, Wake Forest, Minnesota, Illinois State andStanford. Clemson’s 10-point win over Boston College in Boston onFeb. 10 was just the third ACC road win over an ACC team thatfinished the year with a winning record in the last 22 years.Boston College finished the ACC regular season with a 9-7 recordand went to the NCAA tournament. The Tigers posted a 4-4 ACC roadrecord this year, the most ACC road wins in a season for theClemson program since 1996-97. The Tigers won seven regular seasonACC games by double digits, the most regular season league wins by10 points or more in Clemson history. Statistically, Clemsonfinished the year with a +10.3 average margin of victory, thirdbest in school history. Clemson’s .688 free throw percentage wasthe third best for the program in the last 22 years. Clemson’s .374three-point percentage was the fourth best in school history.

Head Coach Oliver Purnell was named the NCAA District IIICoach of the Year by the National Association of Basketball Writersand was one of 10 finalists for the Hank Iba Award. Trevor Bookerled the ACC in field goal percentage and rebounding, the first ACCplayer to do that since Tim Duncan in 1996-97. He is the first ACCunderclassman to do it since Dale Davis of Clemson in 1989-90. (Itwill be virtually impossible for any ACC player to overtake him ineither category in the postseason.). Booker was named second-teamAll-ACC, first-team All-District and first-team All-ACC Defensethis year. Booker finishes his junior year with 1,239 points, thefifth highest total in Clemson history for a junior. He is alreadyseventh in school history in career rebounds with 792 and will needjust 208 rebounds his senior year to become the third player inClemson history with at least 1000 rebounds, joining all-timegreats Dale Davis. Booker is already first in Clemson history inrebounds among players 6-7 or shorter. Booker will enter his senioryear with a .576 field goal percentage for his career, fifth bestin school history. He also stands fifth in career blocked shotswith 204. K.C. Rivers leaves Clemson as the school’s career leaderin victories (91), ACC wins (35), three-point goals (281) and tiedfor first in games played (134). He is third in steals (210),fourth in double figure scoring games (90), fourth in field goals(625), sixth in career scoring (1684), and 11th in rebounding(721). He is first among Clemson players 6-5 and under inrebounding. Rivers finished his career with 210 steals and 174turnovers, just the second player in Clemson history to complete acareer with more steals than turnovers (Sean Tyson 1987-91).Freshman guard Andre Young finished the year with a 2.87/1assist/turnover ratio (66/23), the second best assist/turnoverratio in Clemson history. Raymond Sykes finished his career with102 career blocked shots, ninth best in Clemson history. He playedin 85 victories, second on the Clemson all-time list. TerrenceOglesby made 92 three-point goals in 2008-09, fourth highest singleseason total in school history. Oglesby enters his junior yearsixth in school history in three-point goals with 177. DemontezStitt took 18 charges this year, tied for sixth best in Clemsonhistory and most by any Clemson player since Jerry Pryor had 21 in1987-88.