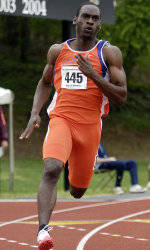 College Park, MD – Travis Padgett successfully defended his crown in the 100m dash to lead Clemson to a second-place showing at the ACC Outdoor Track & Field Championships on Saturday. In total, the Tigers turned in 11 All-ACC performances throughout the week, including three individual titles and one relay crown. Seven student-athletes that traveled won ACC championships. Sixteen of the 20 on the travel roster scored in at least one event for Bob Pollock’s squad.

Florida State won its third straight ACC outdoor title with 166.5 points. The Tigers have finished runner-up the last three years and five out of the last six years to the Seminoles. Clemson finished with a total of 118 points.

“It was good to see that our guys could come out and compete today,” said Pollock, who expressed satisfaction over the improvement the team showed from the 2006 outdoor meet. “We came and accomplished some good things. It was great to end the meet on such a high note as well.”

The high note Pollock referred to came in the meet’s final event, the 4x400m relay. Clemson turned in a season-best time of 3:09.89 to take home the gold medal, the first outdoor 1600m relay crown won by the Tigers since the 1996 season. The group of Cowin Mills, Andrew Porter, Travis Swaggard, and Corey Brown were responsible for making it happen. Their performance established a Kehoe Track record, previous held by the Tigers’ 1996 team. The time was also good enough to qualify the group for regionals.

Padgett led the 4x100m relay team to its best time of the season and a runner-up finish. The Tigers clocked in at 39.48, which is a strong regional mark. The group consisted of Padgett, Brown, Ford, and Spiller. It was just the second time this season that group has performed together in the relay.

Padgett’s outstanding performance continued through the 200m dash final. The Shelby, NC native earned his first-ever All-ACC accolade in that event with a personal best time of 21.04. Ford was fifth at 21.47 seconds.

Matt Clark capped an incredible week as well on Saturday, finishing runner-up in the 5000m. He won the 10,000m on Thursday. He earned a total of four All-ACC honors this season (including indoors) and was a consistent big-time performer when needed. Clark had a time of 14:12.12. Bryce Iverson scored in the event after posting a time of 14:29.54, a personal best for the Manassas, VA native. He placed seventh.

Ryan Koontz continued his outstanding work after placing fourth in the 110m high hurdles. He also scored in the decathlon and high jump this week. Koontz’ time of 14.33 matched his personal best. Porter was sixth in the intermediate hurdles with a time of 52.03. He had the top preliminary time on Friday.

Jason Bell earned his fourth All-ACC honor, his second at the outdoor meet. The senior from Warner Robins, GA had a season-best leap of 51’4.5″, strengthening his regional-qualifying effort. He achieved the mark on his final jump of the day to finish runner-up.

Mitch Greeley matched a season-best in the pole vault with a clearance of 17’0.75″. He finished second to Matt Hurley of Florida State on Saturday. He now has a total of six career All-ACC honors, including three straight outdoors. Three other Tigers competed Saturday, but did not clear heights in the vault. Greeley cleared his first two heights on the first try. Hurley then cleared the next bar on the final attempt, while Greeley was unable to do so in his three vaults.

The Tigers return to action next week to compete at the prestigious Penn Relays.