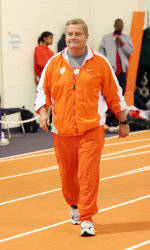 The Clemson men’s track & field team is ranked 10th in the first outdoor poll of the season, released Tuesday by the U.S. Track & Field and Cross Country Coaches Association (USTFCCCA). The Tigers finished the 2007 indoor season tied for 15th at the NCAA Championships. Clemson is also ranked 11th in the latest Trackwire calculations.

Clemson is led by indoor national champion C.J. Spiller, and Jacoby Ford is ranked #5 by Trackwire and boasts the second-best time in the ACC this season.

Four other Tigers are ranked among the ‘Dandy Dozen’ by Trackwire this week, including Ford who is listed fifth in the 100m dash. Itay Magidi, who has yet to compete this outdoor season, is listed seventh in the steeplechase. He is a three-time NCAA participant in that event. Jason Bell is ranked 10th in the triple jump and is a returning outdoor All-American in that event for the Tigers. Ryan Koontz is in the #7 spot in the decathlon. He earned All-America honors last spring in that event and was also a heptathlon All-American this past indoor season.

Clemson will return to action this weekend for the Solid Orange Classic and as a full squad at the ACC Championships on April 19-21.