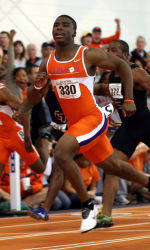 Ford’s unbelievable time of 6.52 seconds, which is tops in the NCAA this season, was by far the best time of the day in the 60m dash. He routed the field in the final, finishing ahead of Michael Ray Garvin and Greg Bolden of Florida State. C.J. Spiller (6.74) was eighth. All four Tigers posted NCAA qualifying marks in Saturday’s final.

The 4x400m relay team of Cowin Mills, Andrew Porter, Travis Swaggard, and Corey Brown finished second in the final section and third overall on Saturday. Porter gave the Tigers a push and put Clemson in first place heading into the final two legs. Maryland fought back and prevailed by inches down the stretch. Clemson’s time was 3:15.50.

Magidi led the first six laps of the mile run, but was unable to hold off a strong push from Tom Lancashire (Florida State) and Brad Wharton (Wake Forest). Magidi finished fourth in the event with a time of 4:06.54.

Jason Bell earned his second indoor All-ACC honor after he hit a mark of 50’11.5″ on his final attempt of the afternoon. James Lemons of Georgia Tech won that event. Ryan Koontz (43’2.5″) finished 11th in the triple jump.

Mitch Greeley earned his third All-ACC honor in the indoor pole vault. The Rock Hill, SC native finished runner-up with a clearance of 17’5.5″. Freshman Chris Spear was fourth in his first-ever ACC Championships. He cleared a personal best 16’9.5″, which ranks fourth in school history.