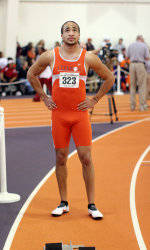 Philadelphia, PA – The men’s track & field team wrapped up the second day of competition from the prestigious 113th Penn Relays on Friday. The meet was held at historic Franklin Field through poor, wet conditions. Lightning strikes delayed the meet for more than an hour and a half.

Travis Padgett will not get a chance to defend his 100m dash title. In what he thought to be a false start, as did the Clemson coaches, he pulled up momentarily. A gun was never fired to stop the race, thus the sophomore turned in easily the slowest time in his brilliant sprint career. Corey Brown ran in a different heat, turning in a time of 10.50 which was fifth-fastest of the day. He qualified for the 100m final at 4:25 PM Saturday.

In the 4x100m relay, the group of Gwantaveus Anderson, Brown, Padgett, and Cowin Mills posted a time of 40.76 seconds, finishing second in their heat and ninth-best overall. The same squad competed in the 4x200m relay, where it also placed second in its heat. The Tigers had a time of 1:24.45, just shy of the season-best in that event. Clemson will compete in that final at 2:40 PM Saturday.

Andrew Porter won his rain-soaked heat in the 400m hurdles with a time of 52.66, which was seventh-best on Friday morning. He has already posted regional-qualifying marks in the event this season.

The team will conclude its efforts at the Penn Relays on Saturday. The running finals will be held, as well as the championship flights for the high jump, triple jump, and pole vault.