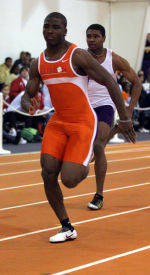 The first poll of the 2007 indoor track & field season was released by the U.S. Track & Field and Cross Country Coaches’ Association (USTFCCCA) on Tuesday. Two-time defending indoor NCAA champion Arkansas is ranked #1 in the initial poll, while Florida State is ranked second. Clemson, off to a strong start this season, is #13 in the rankings.

Six student-athletes on the Clemson men’s team have posted provisional NCAA qualifying marks so far this indoor season. Two sprinters have posted strong times in the 60m dash, Jacoby Ford and Travis Padgett. A freshman from Royal Palm Beach, FL, Ford clocked a 6.65 time in his first-ever collegiate meet, which is the third-fastest mark in the nation this season. Padgett, ranked #1 in the latest `Dandy Dozen’ report by Trackwire, holds a personal best 6.68 in the 60m event.

A pair of horizontal jumpers have posted NCAA provisional marks this season as well. Jason Bell, a senior from Warner Robins, GA, has a season-best 51’3.75″ in the triple jump.

Mitch Greeley has been one of the team’s consistently strong performers all season. He has posted NCAA provisional marks in each of the three meets he has competed this year. Greeley is the school’s indoor and outdoor record-holder in the pole vault.

Ryan Koontz became the latest Tiger to qualify for the NCAA Championships provisionally. Last weekend, the senior posted 5,461 points in the heptathlon at the JRF Multi-Event Challenge. He is also ranked among the `Dandy Dozen’ by Trackwire in the multi-events area.