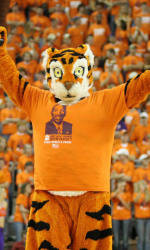 The Clemson Athletic Marketing Department earned national accolades earlier this week as its Oliver Purnell’s Posse t-shirt won the silver medal in its group at the 17th Annual National Association of Collegiate Marketing Administrators (NACMA) convention in Dallas, Texas. Director of Marketing Mike Money was present to accept the award.

Awards were presented in 18 categories, with each category divided into three groups based upon school size and conference affiliations to promote fairness. A total of 1300 entries were received for the 2007-08 year.

Recent Clemson graduate Seth Vining and current Clemson student Seth Mullikin came up with the idea for the shirt. Both were members of student government as well as a student group that worked with Athletic Department officials on basketball initiatives. Clemson Athletics and Student Government worked together in creating a very successful “OPP” campaign throughout basketball season.

NACMA is the first organization of its kind to provide educational and networking opportunities, enhancement of acceptable operating standards and ethics and establishment of the overall prestige and understanding of the profession of athletics marketing administrators. For more information about NACMA, visit www.nacma.com.