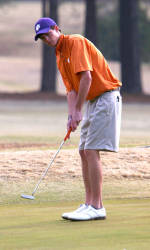 Clemson Makes a Move Into Second-Place Tie at Brickyard Collegiate

MACON, GA – Clemson had all five of its players shoot 73 or better on Sunday and the Tigers put together a five-under par team score to move into a tie for second place at the Brickyard Collegiate. The Tigers shot a 283 total, the third-best round of the day, and now trail leader Augusta State with one round remaining at the Brickyard at Riverside club.

Georgia had the best team score in the second round at nine-under par. Augusta State was under par as a team for the second straight round (281). The Jaguars have a 13-shot advantage over Clemson and UT Chattanooga, who are both at even par.

Luke Hopkins was the team leader in round two with, a three-under par score of 69. Hopkins was two-over par through five holes, but an eagle three on the sixth sparked the senior out of Greer, SC. Hopkins would then add three birdies and nine pars for the remainder of his stellar round. Hopkins has a 36-hole total of 142, good enough to place him in a tie for 10th in the individual standings heading into the final round.

Freshman sensation Crawford Reeves lived up to his reputation Sunday, turning in an outstanding round of two-under par 70. Reeves began the day with two bogeys in his first three holes, but did not suffer an over-par score on the final 15 holes. He birdied the fourth, fifth, and ninth holes to shoot under par on the front nine. On the back, he birdied the par-five 18th hole. Reeves has a two-day total of 145 and is tied for 21st in the individual standings.

Jacob Burger was the third Clemson player to shoot under par Sunday. The sophomore from Orangeburg, SC shot a one-under 71 for his round. Burger had a flawless opening nine with one birdie and eight pars. He did bogey two holes on the back nine, but those were offset by a pair of birdies. Burger has a two-day score of 144, even par. He is tied for 15th.

Ben Martin, a senior from Greenwood, SC, had another solid outing for Larry Penley’s team. Martin shot a one-over par 73, but played the final seven holes in one-under after a double bogey and bogey to start his final nine holes. Martin has a two-day total of 147, three-over par. He was ninth in this tournament a year ago.

Will Ovenden, playing just his second collegiate round, had a fantastic final nine holes to put a cap on a solid round. He shot a 73 on Sunday, thanks to a pair of birdies on the back nine. Ovenden is two-over par (146) over the first 36 holes of his young career. He is tied for 28th in the individual standings.

The tournament concludes with the final 18 holes on Monday.