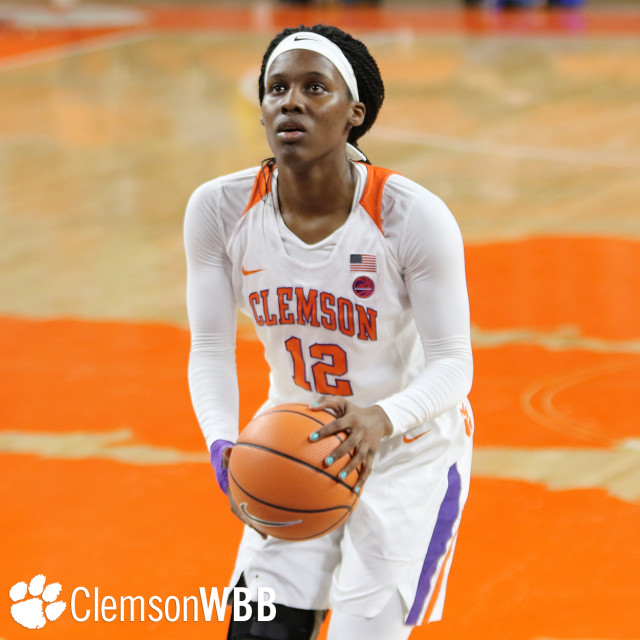 CLEMSON, S.C. – The Clemson women’s basketball team lost a hard-fought game, 60-48, to Georgia Tech on Sunday afternoon at Littlejohn Coliseum, in a game that featured eight ties and 10 lead changes. With the loss, the Tigers dropped to 11-13 (1-10 ACC), while the Yellow Jackets improved to 14-10 (3-8 ACC).

Georgia Tech led 11-7 after the first quarter, but the Tigers picked up the offense in the second period, outscoring the Yellow Jackets 16-12 to tie the game at 23-23 at the half. Sophomore Kobi Thornton sparked the offense, scoring the team’s first nine points of the quarter on 4-for-5 field goal shooting, all in the first five minutes of the frame.

The score was tied 29-29 with 5:06 remaining in the third quarter when the Yellow Jackets went on a 12-5 run over the next three minutes, making five straight field goals during the stretch, to take a 41-34 lead with 2:24 left. Clemson fought back though, cutting the deficit back to two points with 0:39 left to play in the quarter, thanks to the efforts of junior Aliyah Collier. Collier, who was playing in just her second game back after missing eight due to injury, scored eight points on 2-for-2 field goals and 4-for-6 free throws in the third quarter. Georgia Tech hit a three-point basket in the final seconds of the period to extend the lead back to six points, 45-39.

Clemson brought the deficit back to four points with a Thornton jumper with 7:34 to go in the game, but then Georgia Tech’s offense took over with a 13-2 run and another stretch of five-straight made field goals, putting the game out of reach.

Thornton finished with 12 points on 5-for-10 from field goal range and added four rebounds, three steals and a blocked shot. It was the seventh-consecutive game in double-figure scoring for the sophomore. Junior Danielle Edwards posted 10 points, five steals and three assists, and Collier finished with 10 points and four rebounds. Junior Keniece Purvis gave a solid effort and provided some additional depth off the bench, playing 22 minutes after averaging 5.4 minutes per game in the 23 games prior to today.

The Tigers travel to No. 4/4 Louisville for a Wednesday ACC road matchup against the Cardinals. Tipoff is set for 7 p.m. at the KFC Yum! Center.