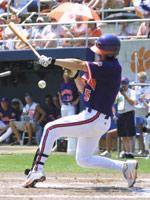 Clemson, SC- Clemson went 0-for-9 with runners in scoring position and lost its first home game of the year to Virginia 4-1 Saturday afternoon in front of 5,286 fans at Doug Kingsmore Stadium. The loss was the first since the second game against Arkansas during last year’s Super Regional. With the loss, the 15th-ranked Tigers fell to 22-7 (2-3 in the ACC), while the Cavaliers improved to 20-9 (6-4 in the ACC).

The leadoff hitter reached base in six of the nine innings for the Tigers, yet each failed to score. Clemson stranded a total of nine runners in the contest.

Jeff Hahn (3-4) was credited with the loss for the Tigers. He gave up two earned runs off of six hits in 4.1 innings pitched. Mike Ballard (2-2), a freshman lefthander for the Cavaliers, earned the win. Ballard threw five shutout innings and gave up just four hits. Adam Laird and Alan Zimmerer pitched the final four innings for the Cavaliers, giving up just three additional hits.

Virginia got off to a good start in the first inning. With two outs, Cavalier shortstop Mark Reynolds hit a double down the left field line. He was then plated by Joe Koshansky’s single up the middle, giving Virginia an early 1-0 lead.

The Cavaliers tacked on two runs in the fifth inning. Scott Headd led off with a walk, advanced to second on a single, and then scored on a single through the left side by Matt Street. Then, with the bases loaded, Virginia extended the lead to 3-0 on a sacrifice fly to left center by Koshansky.

Virginia stretched the lead to 4-0 in the seventh inning. Ryan Zimmerman slapped a 3-1 pitch from Aaron Trolia through the left side of the infield to score Matt Dunn.

Clemson did not get on the board until the seventh inning, when junior shortstop Russell Triplett belted his second home run of the year to left field. The solo shot was the first of the year at home for Triplett, who went 2-for-3 in the game.

The two teams will decide the series on Sunday at 1:00 PM. Junior righthander Steven Jackson (3-1) is slated to be on the mound for the Tigers.