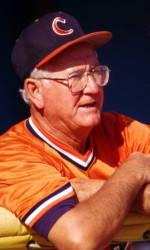 Eight former greats of the game of college baseball gathered in Lubbock, TX on Sunday to celebrate their inductions into the National College Baseball Hall of Fame.

“This is a great class,” said Mike Gustafson, executive director of the Hall of Fame and the College Baseball Foundation. “This class definitely features some names that baseball fans will know, but every member of this class put up outstanding numbers during his career.”

Coach Bill Wilhelm, who passed away in December of last year, was among the celebrated eight. Wilhelm coached at Clemson 36 years ( 1958-93) and never had a losing season. His 1,161 win total was fifth-best in the nation at the time of his retirement and still is in the top 20. Wilhelm won 19 regular-season ACC Championships, seven ACC Tournament titles, and remains the career wins leader in the ACC with 381. Wilhelm’s teams were immediately successful, with the 28-year-old head coach taking his first two teams to the College World Series in Omaha in 1958 and 1959. Wilhelm’s teams would return to Omaha four more times in 1976, 1977, 1980, and 1991.

Among Wilhelm’s legacies was his invention of the ACC Tournament, which began in 1973 and provided the template for other conferences around the nation. From 1973-85, Wilhelm’s teams either won the ACC title or played in the championship game, a streak that speaks to the dominance of the baseball program under his leadership.

Wilhelm’s tough, demanding approach to coaching were enhanced by his integrity and what has been called his “brutal honesty,” qualities which led him to develop his players according to their abilities. Wilhelm coached 88 First-Team All-ACC selections and had 100 players sign professional contracts, with 27 players advancing to Major League careers. Wilhelm’s last team in 1993 provided a fitting farewell for the legendary coach, winning the ACC Tournament in dramatic fashion with a three-run homer in the bottom of the ninth inning. The win earned Wilhelm his seventh tournament title, and in addition to 19 regular-season titles, gave him 26 ACC Championships in 36 years of coaching.

Wilhelm’s sons, Michael and Randall, represented their father at the awards ceremony and accepted his induction into the Hall of Fame.