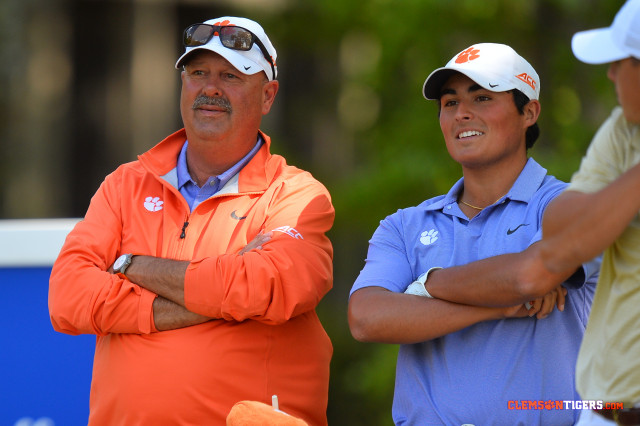 Clemson, S.C.—Freshman Kyle Cottam recorded his first career round in the 60s to lead Clemson in the second round of the Trinity Forest Invitational at Trinity Forest Golf Club in Dallas, Tex.

The Tigers are in eighth place (575) entering Tuesday’s final round at the site of the 2018 Byron Nelson Invitational on the PGA Tour. Auburn and Florida have the team lead at 560.

Kottam, who was Clemson’s No. 5 player entering the tournament, has been Larry Penley’s top player with a 140 total through 36 holes thanks to rounds of 71 and 69. He stands in a tie for eighth place individually and is just four shots out of first entering the last 18 holes.

Kottam, a native of Knoxville, Tenn, had five consecutive birdies on the front nine, his second nine of the day, and shot 31 for that front nine to jump into the top 10.

Clemson’s second best player on Monday was also a freshman as Turk Pettit had an even par 71 to go with a 72 in the opening round. His 143 total is tied for 22nd in the field of 77 golfers.

Bryson Nimmer is Clemson’s second best player for the tournament with a 142 total after rounds of 69 and 73.   The Clemson junior leads the field in scoring on par five holes at 4.00.

Doc Redman, playing in his first tournament of the year, had a 77 on Monday and has a 36-hole total of 152. William Nottingham was Clemson’s non-counter with a 78 on Monday and stands at 151 entering the final round.

Auburn and Florida have the team lead entering the final round with a 560 total. Clemson is at 575 in eighth place.