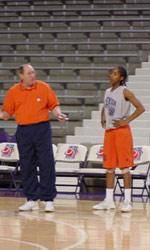 MANHATTAN, KS – The Clemson Lady Tiger basketball team will play Arkansas in the first round of the NCAA Women’s Basketball Tournament at Bramlage Coliseum Friday night at 7:00 p.m. eastern time in Manhattan, KS.

Arkansas is seeded sixth while Clemson is the 11th seed. The game can be heard live on WCCP-FM 104.9 Clemson, SC. Jim Phillips and Barbara Kennedy will bring the action.

The Lady Tigers are led in scoring by Chrissy Floyd with a 17.8 ppg. average. Krystal Scott is Clemson’s second leading scorer with a 10.5 ppg. mark. Maggie Slosser leads the team in rebounding with a 5.0 rpg. average.

Arkansas is led is scoring by Shameka Christon with a 15.9 ppg mark. India Lewis is second on the squad in scoring with a 14.2 ppg. average. Christon leads the team in rebouding with a 6.1 rpg. mark.

Jim Davis. “It is a honor to be here. We are a basketball team that has grown this season. We were an inexperienced team at the beginning of the year, especially in the front court. But this team has grown and we are playing our best basketball right now. Clemson and Arkansas have a lot of similarities. I have known Arkansas’ coach Gary Blair for a long time. They rely on the perimeter game like we do. They are athletic like we are.

We like an up-tempo style like they do. We hang our hat on defense just like Arkansas. With this said, I think it is going to be an exciting game.