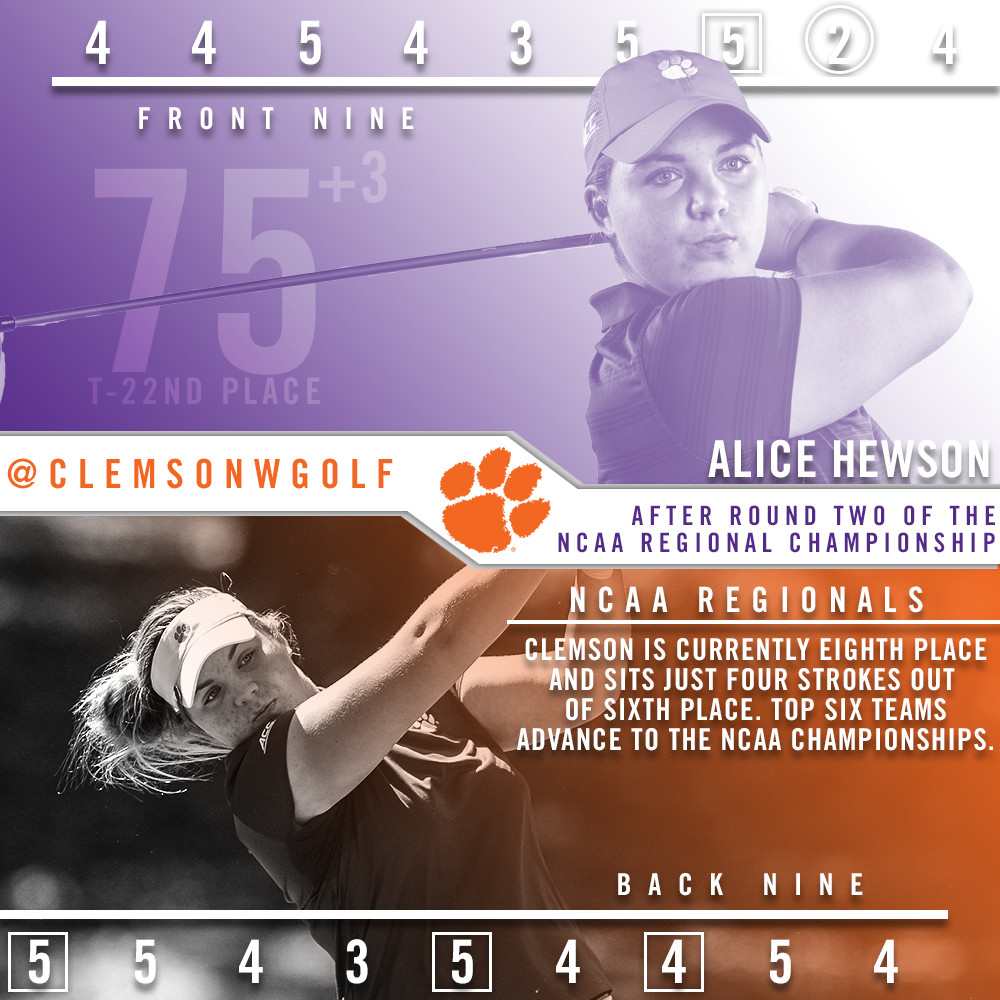 Clemson, S.C.—Clemson has moved to within just four shots of the sixth-place cutline after 36 holes of the NCAA Shoal Creek Regional Golf tournament at Shoal Creek Country Club  in Birmingham, Ala.  The Tigers are in eighth place out of 18 teams with a 618 score with 18 holes remaining on Saturday.

The top six teams in the field after 54 holes advance to the NCAA Championship in Eugene, Ore. May 20.  California stands in sixth-place entering the final round at 614, 38-over-par.

Lauren Stephenson and Alice Hewson both shot rounds of 75 on Friday afternoon in difficult windy conditions to lead the Tigers on a day when the average score for the 96 players in the field was 79 on the par 72 course.

“Lauren and Alice played very well today,” said Head Coach J.T. Horton.  “These were windy conditions on a difficult course.  We have a chance tomorrow and that’s all we can ask. We are looking forward to this opportunity. I believe in this team, and know they have what it takes to capitalize tomorrow.”

Stephenson and Hewson are both in the top 25 of the individual race.  Stephenson has had consistent rounds of 74 and 75.  The freshman who had a team best three birdies in the second round, has played the par four holes in +2 for the first two rounds, tied for best in the field.    The native of Lexington, S.C. is in a tie for eighth place at five over par, just four shots off the individual lead.

Hewson also had a 75 on Friday during a round in which she had one birdie, four bogeys and a team best 13 pars.  Through two rounds the freshman from the United Kingdom has 25 pars, most among the Clemson players and tied for second in the field.  Hewson is in 22nd  place after two rounds with a 152 total, eight over par.

Sydney Legacy was Clemson’s third best player in the second round with a seven-over-par 79.  She had two birdies in the round and has a team best five birdies for the first two rounds.  Her 156 total for two days is ranked in a tie for 46th.

Jessica Hoang was Clemson’s fourth counting score on Friday with an 81, while Marisa Messana had an 83.

Clemson will be paired with Michigan and Vanderbilt on Saturday and will begin play at 7:30 am local time, 8:30 am Eastern.