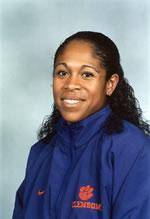 60m Hurdles Florida’s Andrea Bass was the top finisher in the 60m hurdles race, clocking a provisional qualifying time of 8.34. Clemson took three of the next four places, led by Jelyn Quick and Christina Smith advanced to the finals with time of 8.81 and 8.83, respectively. Florida State also advanced two to the finals, as LaKendra McColumn and Deanna Lane psoted times of 8.83 and 8.84, respectively. Andriane Lapsley of Georgia Tech was also a finals qualifier with her time of 8.85.