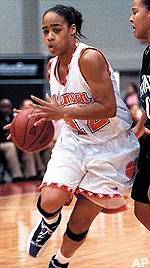 CLEMSON’S RECORD–Clemson has an 18-10 record overall, and a 9-7 mark in the ACC. The Lady Tigers are 9-3 at home this season. Clemson has won two games in a row.

CLEMSON TO START PLAY IN THE ACC TOURNAMENT SATURDAY-Clemson will start play in the ACC Tournament on Saturday, March 4. The Lady Tigers are seeded fourth in the tournament and will play fifth-seeded North Carolina at 1:00 p.m. The game will be televised by Fox Sports South, the Florida Sunshine Network, and Home Team Sports.

The Lady Tigers’ Erin Batth was named to the ACC’s All-Defensive team.

Floyd is Clemson’s leading scorer with a 12.4 ppg. average. She also leads the team in steals with 53. Floyd is also third on the team in assists with 39.

Angie Cossey is the Lady Tigers’ second leading scorer with a 9.6 ppg. average. Cossey leads the team with 30 three-point goals. She leads the team in free throw pct. with a .827 mark.

THE SERIES VS. ACC SCHOOLS IN THE ACC

Regular Season ACC Finishes for the Lady Tigers No. of times finished in this place

(First number is outright, second number is a tie.)

Clemson’s Seeding Over the Years No. of times seeded in this position

CLEMSON IN OVERTIME GAMES IN THE ACC TOURNAMENT–Clemson is 3-1 involving overtime games in the ACC Tournament for a .750 pct. The .750 pct. is the best winningest pct. among the ACC schools.

CLEMSON’S BARBARA KENNEDY-DIXON NAMED THE ACC TOURNAMENT’S MVP THREE TIMES–Former Clemson player and former Assistant Coach Barbara Kennedy-Dixon is the only player in the ACC to be named the ACC Tournament MVP on three occasions. Kennedy won the award in 1980, 1981, and was named Co-MVP in 1982. Clemson made it to the semifinal rounds in 1980 and 1981, while in 1982 the Lady Tigers advanced to the finals. Kennedy-Dixon is the only player in ACC history to win the award and not be a member of a team in the championship round. She did this on two occasions, 1980 and 1981.

CLEMSON LEADERS–Clemson is led in scoring by freshman sensation Erin Batth with a 7.3 rpg. mark. Erin Batth is the Lady Tigers’ second leading scorer with a 9.6 ppg. average. Krystal Scott leads the Lady Tigers in assists with 92 or 3.3 assists per game.

NURIA FORNS IS ONE OF CLEMSON’S BEST THREE-POINT SHOOTERS–Nuria Forns is one of Clemson’s best ever three-point shooters. She is fifth on the Clemson career list for most three-point field goals made with 55. She only needs two more three-point goals to move into fourth place.

CLEMSON IS YOUNG TEAM–Clemson has only three players who have played in 70 or more career games at Clemson. Nuria Forns has played in 90. Chrissy Floyd has averaged more than 20 minutes per game. Floyd is averaging 29.5 minutes per game.

MUNGRO OVERCOMES OBSTACLES–Clemson’s Joanie Mungro had a pacemaker inserted in December. She has a rare, non-life threatening heart ailment that required a pacemaker. So far this season, she is averaging 22.6 minutes per game and has started 21 of the 22 games she has played. Mungro is the Lady Tigers’ second leading rebounder this season with a 5.5 rpg. mark. Mungro leads the Lady Tigers in field goal pct. this season as she has hit 56-107 field goals for a .523 mark. For her career at Clemson, she has hit 117-236 from the field for a .496 pct.

FLOYD, A FRESHMAN SENSATION–Freshman Chrissy Floyd is Clemson’s leading scorer with a 12.4 ppg. average. This season she has hit 149-320 from the field for a .466 pct. She is also averaging 2.9 rpg. She is also the Lady Tigers’ leader on defense as she has 53 steals or 1.9 spg. This year, Floyd is averaging 29.5 minutes per contest. This year, she has led Clemson in scoring in eight games this season, including the Lady Tigers’ 71-56 upset win over N.C. State. The last freshman to lead Clemson in scoring at the end of a season was Kerry Boyatt as she averaged 15.3 ppg. her freshman season in 1989-90, 10 years ago. That season Boyatt was named ACC Freshman-of-the-Year.

KRYSTAL SCOTT HAS BECOME STARTER THIS SEASON–Krystal Scott has more than tripled her playing time this season compared to her playing time last year. This year she has played 789 minutes, and last year she played 155 minutes the entire year. She is averaging 8.6 ppg. this season and leads the squad in assists with 92. She is also a 75% free throw shooter this season. In Clemson’s upset win over North Carolina on January 10, Scott scored 16 points. Against Virginia on February 17, She scored a career-high 18 points.

HEAD COACH JIM DAVIS HAS 277 WINS AT CLEMSON–Head Coach Jim Davis has a 277-126 record at Clemson as he is in his 13th season. During his NCAA Division I career, he has a 296-134 record. Davis spent one season, 1986-87, at Middle Tennessee State and compiled a 19-8 record with the Lady Raiders that season.

CLEMSON HEAD COACH OVER APPROACHING 125 ACC WINS–Clemson Head Coach Jim Davis has a 121-79 record against ACC foes during the regular season. He is the fourth winningest coach in the history of the ACC with the 121 league victories.

COSSEY AN 80% CAREER FREE THROW SHOOTER–Angie Cossey is an 80% career free throw shooter. During her Clemson career, she has hit 88-110 free throws for a .800 pct. She is currently in fourth place on the Clemson carreer list for the best free throw pct.

CLEMSON’S JIM DAVIS IS 8-7 IN OVERTIME GAMES DURING HIS CAREER–Head Coach Jim Davis is now 8-7 in overtime games during his career at Clemson. He has also guided the Lady Tigers to five wins in the last eight Clemson overtime games.

CLEMSON ON TELEVISION–Clemson has won 12 of its last 17 games that were shown on television.

DAVIS IS THE FIFTH WINNINGEST COACH IN ACC HISTORY–Head Coach Jim Davis is the fifth all-time winningest coach in the history of the ACC with 277 victories. He is also fourth for most victories in ACC games with 121. He is also the fourth all-time winningest coach in the ACC by percentage, (.686). Davis is also third for the best winning percentage in the ACC Tournament with a .643 figure (18-10).