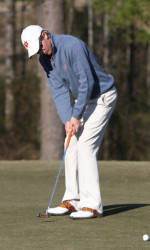 Clemson in Sixth-Place After First Round of Hootie Intercollegiate

Clemson, SC-Sophomore Jacob Burger fired an efficient one under par 70 to lead Clemson to a sixth place standing after one round of the 15-team Hootie Intercollegiate at Bulls Bay Country Club in Mount Pleasant, SC. Clemson has a team score of 294, but it just six shots off the lead, held by LSU, who had a four over par 288 for the first round.

The tournament continues with 18 holes on Monday and the final round on Tuesday.

Burger had one birdie and 17 pars in recording his one under par round on Sunday. He stands in a tie for third place, but is just one shot off the lead, held by Matt Hill of NC State and Sang Yi of LSU.

Luke Hopkins was Clemson’s second best golfer with a one over par 72 on Sunday. He is tied for ninth after a round that included three birdies and four bogeys.

Ben Martin and Corbin Mills had rounds of 76 to open play. Martin struggled down the stretch when he made five bogeys in his last six holes. Mills had six bogeys on Sunday, but did have a birdie on the 16th hole.

Freshman Crawford Reeves had a seven over par 78 and his score did not count towards Clemson’s team score. He had a pair of double bogeys that ruined his round.