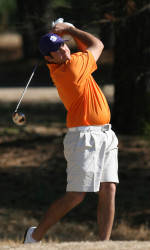 Clemson in Second Place After First Round of NCAA Southeast Regional

Alpharetta, GA- Freshman Luke Hopkins shot even par rounds of 70 to lead Clemson to a 283 team score and a second-place standing after the first round of the NCAA Southeast Regional at the Capital City Club Grabapple Course in Alpharetta, GA.

Clemson trails number-one ranked Oklahoma State (282) by just one shot after the first 18 holes. Host school Georgia Tech is in third place at seven-over-par 287, while Georgia Southern is fourth at 288. Brigham Young is in fifth place at 289. Arizona State, seeded second in the field of 13 teams, is sixth at 290. South Alabama, Wake Forest and Furman are all tied for seventh at 292.

Play will continue on Friday and Saturday. After 54 holes are completed on Saturday, the top five teams will advance to The Honors Course at Chattanooga, TN for the NCAA National Championships, which will be held June 1-5.

Mills had a strong start and was three-under-par for his first five holes. He made consecutive birdies on the 11th, 12th and 13th holes, his second, third and fourth holes of the day. He made a 10-foot putt for birdie on the 11th hole, then hit an eagle chip to a foot on the 12th hole. He then made a four-foot putt for birdie on the 13th hole. The freshman from Anderson, SC was coming off a disappointing finish at the ACC Tournament where he had shot a 77 in the final round.

Hopkins had a solid round that included birdies on the 11th, third and fourth holes. His birdie on the par-three third hole came when he made a 20-foot putt from off the green. The 70 was the low round in an NCAA tournament for the graduate from Greer, SC. Hopkins made three consecutive bogeys on the 14th, 15th and 16th holes, but battled back to get to even par by the end of the round.

All-ACC golfer Ben Martin shot a one-over-par 71 on Thursday. Martin was three-over-par for his first 11 holes, then made consecutive birdies on the third, fourth and fifth holes. His birdie on the par five fourth hole was the most remarkable of the day for a Clemson golfer.

Martin reached a greenside bunker in two on the 600-yard hole, but his bunker shot was errant, hit a slope on the green and ended up 25 yards off the green. He then hit his chip shot into the hole on the fly for a birdie. On the par four, 315-yard fifth hole, he drove the ball into a greenside bunker, then got up and down after hitting his sand shot seven feet from the pin.

Freshman Crawford Reeves had a solid day with a two-over par 72. Reeves had one birdie on the par three 13th hole and three bogeys, but he made 10 pars in a row at one point to have his score count towards Clemson’s team score in his first career NCAA tournament round.

Sophomore Jacob Burger had an opening round 74 and his score did not count towards Clemson’s team score.

“It was a really good start,” said Clemson Head Coach Larry Penley, who has taken the Tigers to the NCAA Tournament 27 consecutive years, the longest active streak for one coach at a Division I school. “We got off to a good start today in that we had to play the more difficult side first (back side) and we didn’t have any big numbers. The 16th hole is very tough, 485 yard par four with wind and a difficult pin placement. We got through that hole in good shape and played well on 18, which is a difficult hole.

“A big key was the fact that everyone was in the game all day, and no one had more than a bogey the entire day. That is 90 combined holes of golf for the five players without a double on this course. That was a good sign.

“The freshmen were huge. Corbin got us off to a great start, he had us under par and in the lead at the beginning and that gave us a shot of confidence. Crawford played consistent all day as well.”