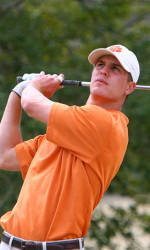 Clemson, SC-Phillip Mollica shot a one over par 72 to lead Clemson to a 294 team score and a ninth-place ranking after the first round of the 15-team Hootie at Bulls Bay Invitational in Mt. Pleasant, SC. The 54-hole event is being played at the par 71 Bulls Bay Golf Club in Mount Pleasant, SC.

Clemson is playing the event without number-one player Kyle Stanley, who played in the Arnold Palmer Invitational on the PGA Tour in Orlando, FL this weekend.

Augusta State has the lead at two over par 286, so the Tigers are just eight shots back of the lead after the first round. Virginia is in second place at 288, while LSU and NC State are tied for third at five over par 289.

Clemson shot 11 over par as a team on the front nine and stood in 12th place at the midway point of the round. But the Tigers rallied to shoot one under par on the back nine to finish with the 10 over par team score.

Mollica’s round was an example as the Clemson senior was four over par on the front nine, but three under par on the back nine to finish at 72. He made birdies on he 10th, 11th and 12 holes and pared the last six holes to finish strong. He is in 11th place after the first round individually.

Senior David May shot a 73 on Sunday to support Mollica, but he was three over par on the last six holes. Ben Martin had a three over par 74 and was two over on the last six holes. Luke Hopkins, playing in his first tournament of the year, had a five over par 76. He was five over through 10 holes, then played even par over the last eight holes. Freshman Jacob Burger had a 78 and his score did not count towards Clemson’s team score.

Second round play continues on Monday. You can follow the scores on golfstat.com.