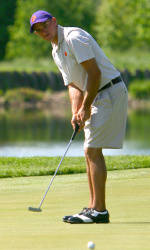 Clemson in Fourth Place After First Round of Carpet Classic

Clemson, SC — Sam Saunders fired a three-under-par 69 to lead the Clemson golf team to a 291 total and a fourth-place standing after the first round of the Carpet Classic in Dalton, GA. The 18-team event has 10 of the top 20 teams in the nation in the field and is being played at The Farm Golf Club.

East Tennessee State has the team lead after a one-under par team score of 287. Central Florida is second at 289 and Mississippi is third at 290. Clemson is tied with Chattanooga at 291, while South Carolina is sixth at 294. Third-ranked Georgia, the highest ranked team in the field had a 299 score and is in 12th place after the first round. The three-day event continues on Saturday.

Saunders had five birdies on the back nine to highlight his day. He made birdies on 10, 12, 14, 15 and 16 on the way to a 32 on the back nine. Saunders, a junior from Windermere, FL, stands tied for second after the first round, just one shot out of the individual lead.

Senior David May had an even par 72 on Friday. The native of Auburn, NY had unusual round in that he had five birdies and five bogeys. He had consecutive birdies on the 7th, 8th and 9th holes. Last year he led Clemson in pars/round. His even par round has him in 14th place after the first round.