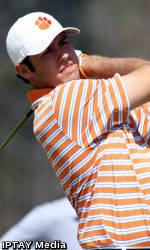 Clemson in First Place Heading into Final Round of Furman Invitational

GREENVILLE, SC – Four Tigers shot three-under-par 69 on Saturday to lead Clemson to a 12-under-par 276 team score after two rounds of the Furman Invitational at the Furman University Course in Greenville, SC. The Tigers are in first place out of 21 teams through 36 holes with a ten-under-par team score of 566. Virginia Tech is in second place, six shots behind the Tigers, with a 572 team score and Georgia State is third at 576.

The tournament will conclude with the final round Sunday at the Furman University Course. Clemson will tee off between 1:00 and 2:00 PM on Sunday.

The Tigers made 17 birdies, one eagle and only seven bogeys between the four counting golfers on Saturday en route to the 12-under-par 276 second round score. Crawford Reeves continued his hot streak for Clemson, making six birdies, three on each nine, and three total bogeys to shoot a three-under-par 69. He is four under after the second round of the tournament with a total score of 140, and is tied for third individually heading into the final round.

Thomas Bradshaw got off to a hot start with birdies on three of his first six holes en route to a three-under-par 69. After two rounds, Bradshaw also has a total score of 140, which puts him in a tie with Reeves for third individually, five shots behind the leader.

Corbin Mills, after making bogey on the first hole, immediately got his round back into red numbers by making an eagle on the par-five second hole. After playing the front nine in one-under-par 35, he recorded the best back nine score of any Tiger with a two-under-par 34 to shoot 69 on the day. Mills now has rounds of 74-69 for a total score of two-under-par 143 heading into the final round.

Billy Kennerly continued his strong play, making four birdies and only one bogey for a second round score of 69. The freshman has rounds of 74-69 for a two round total of 143.

McCuen Elmore bounced back on Saturday after a rough first round on Friday to shoot a two-under-par 70. His round included six birdies, two bogeys and a double bogey. Elmore is now three-over-par for the tournament with a score of 147 entering the final round.

Matt Thompson of Michigan leads the individual portion of the tournament with a nine-under-par score of 135.

Clemson is the two time defending champion of the Furman Invitational, having claimed the title in both 2010 and 2011.

Clemson golfers Alex Boyd, David Dannelly and Hayden Garrett are playing the tournament as individuals. Boyd has rounds of 75-71 for a 146 score and Dannelly recorded a 76 in the second round to match his first round 76 for a two-round score of 152. Garrett improved on his first round score of 78 by shooting a 76 in the second round for a total of 154 through two rounds.