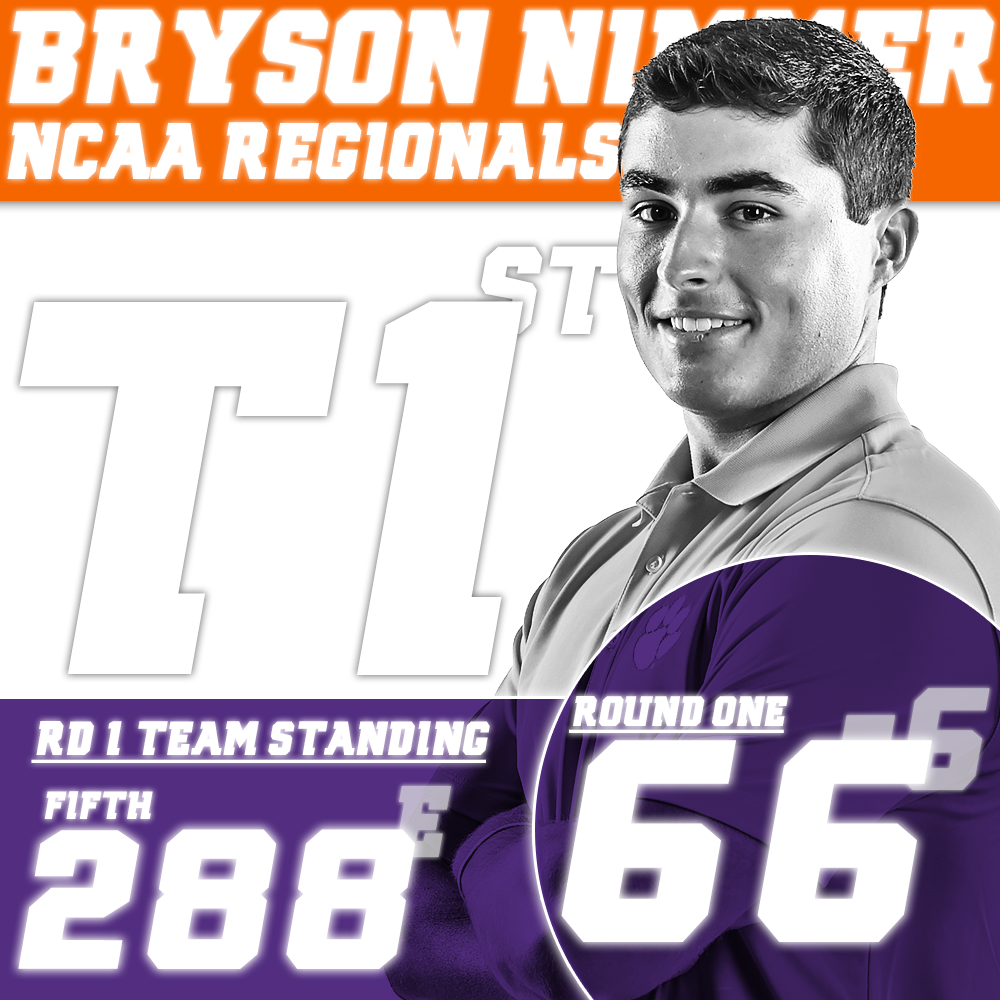 Clemson in Fifth Place after First Round of NCAA Regional

Murfreesboro, Tenn—Bryson Nimmer tied the Clemson record for low round in an NCAA Regional on Monday with a six-under-par 66, leading Clemson to a fifth place standing after the first round of the NCAA College Grove Regional in Murfreesboro, Tenn.   Clemson had an eve- par team score of 288 and is in fifth place in the 13-team field.

Top seed Vanderbilt has the team lead with a nine-under par 279 after 18 holes.   While Clemson is in fifth place, the Tigers are just three shots out of second. UCF holds down second with a 285 score, while Troy is third at 286 and Kennesaw State is fourth at 287.  The Tigers are followed by Middle Tennessee State at 289.   It was a rough day for Georgia, who is at 294, and second seeded Texas Tech, who is tied for last with Harvard at 299.

The top five teams after three days and 54 holes will advance to the NCAA Championship Tournament at Rich Harvest Farms in Sugar Grove, Illinois May 26-31.

Nimmer, who was Clemson’s top player at the ACC Tournament three weeks ago, got off to a rough start with two bogeys within his first four holes. But the sophomore from Bluffton, S.C. then made eight birdies over his last 14 holes to finish in a tie for first with Vanderbilt’s Patrick Martin, the No. 9 player in the nation.

Nimmer’s round was the lowest by a Clemson golfer in an NCAA regional since Gregg Jones had a 66 on a par 70 Yale University Course in New Haven, Conn., in 2004.   Nimmer’s performance tied the Clemson record for low round vs. par in a regional. Bobby Doolittle had a six-under-par 66 on May 21, 1993 at Birdwood Golf Club in Charlottesville, Va. Nimmer’s six-under performance was just one shot off the Clemson record for any NCAA Tournament. Mark Swygert had a seven under 65 in the 1994 NCAA National Tournament in Texas.

Nimmer was the only Tiger to shoot under par on Monday.   Freshman Doc Redman and William Nottingham both had rounds of one over par 73.

Redman, Clemson’s low stroke average player for the season, started out with a birdie on the first hole, then an eagle on the second to get to three under par. That was his team leading eighth eagle of the year, but his first in two months.   He was playing well until he had a triple bogey eight on the par five 11th hole. He played the final seven holes in even par. Nottingham had four bogeys and three birdies on the day to finish with a 73 and is tied for 24th with Redman.

Carson Young, who graduated from Clemson last week, shot a four over par 40 on the front and played the back nine even par to finish with a 76, just his third round over 75 all year. It was an unusual round for Young, who came into the tournament leading the Tigers in birdies with 137, but he did not have one on Monday.

Classmate Austin Langdale also started slowly with a double bogey on the second hole and he was six-over-par through 12 holes. But the native of Pendleton played the last six holes at even par to finish with a 78. It was Langdale’s first round for the Clemson team since April 9 when he suffered an injury at the Clemson Invitational.

Clemson will begin play on the first hole in the second round at 9:20 a.m. Eastern time on Tuesday. The Tigers will be paired with Kennessaw State and host school Middle Tennessee State.   Scoring is available on golfstat.com.

Team Scores after First Round of NCAA College Grove Regional