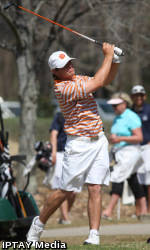 Clemson in Fifth Place After First Round of Furman Invitational

GREENVILLE, SC – Thomas Bradshaw and Crawford Reeves both fired a one-under-par 71 to lead Clemson to a two-over-par team score of 290 and a fifth place standing out of 21 teams after the first round of the Furman Invitational in Greenville, SC on Friday. The event is being played over the weekend at the par 72 Furman University Course. Clemson will tee off between 8:00 and 9:00 AM on Saturday. There is no admission charge.

Thomas Bradshaw and Crawford Reeves each had rounds of one-under-par 71 to lead the Tigers. Reeves had three birdies and two bogeys, while Bradshaw had a wild round with six birdies and five bogeys. The highlight of Reeves’ round came when he chipped in for birdie on the par four 18th hole, his ninth hole of the day, to shoot a one-under-par 35 on his first nine. Bradshaw birdied three of his final six holes en route to a one-under-par 71.

Troy is the team leader through one round with a two under par 286, while Wofford and Francis Marion are tied for second at 288. East Tennessee State is currently fourth with a 289 team score.

Three Tiger golfers competed as individuals on Friday at Furman. Alex Boyd paced the group, as he shot a three-over-par 75, while David Dannelly shot a 76 and Hayden Garrett recorded a 78 for the round.