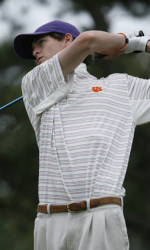 Clemson In 10th Place After Two Rounds at Isleworth

Clemson, SC–Luke Hopkins and Jacob Burger both had rounds of two-over-par 74 on Monday to lead Clemson to a 298 team score and a 10th place standing after two rounds of the Isleworth Collegiate in Windermere, FL. Seven of the top 10 teams in the nation are participating in the 15-team event.

Clemson has a team total of 605 after the two rounds, 29 over par. Clemson improved its play by nine strokes over the previous day when it had a 307 total. Clemson shot nine over par on the 18th hole on Sunday in the first round, but counted just one bogey on Monday.

Number-one ranked Oklahoma State is in first place at 580, four over par for the two rounds. Florida is second at 584 and Stanford is in third place at 589. While Clemson is in 10th place, it is ahead of second ranked Arizona State (12th, 608) and third ranked Washington (14th at 609).

Hopkins, a senior, and Burger, a sophomore both had solid rounds of 74 on the par 72 course. Hopkins, who birdied three holes on the back nine in a five hole stretch, had a 76 in the first round and is Clemson’s best player through two rounds with a 150 total, good enough for 27th place. Burger, the sophomore from Orangeburg is in 39th place at 153. Freshman Corbin Mills, who birdied two of his first three holes, saw his score count for the second straight day, as he had a 75 and is second among Tigers for the tournament with a 152 score. Freshman Crawford Reeves improved by four shots on Monday to 75 and his round counted towards Clemson’s team score. He is in 44th place at 154.

Senior Ben Martin, Clemson’s top player entering the tournament, had an 82 on Monday and stands at 157 after two rounds, 58th place.

The tournament concludes with 18 holes on the par 72 layout on Tuesday. It will conclude Clemson’s fall schedule.