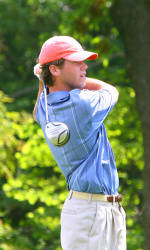 Clemson, SC – Ben Martin fired a five under par 66 to lead Clemson to a 20-stroke improvement over its first round and a four place improvement in the standings at The Hootie Intercollegiate at Bulls Bay Golf Club in Mount Pleasant, SC. The Tigers stand in a tie for fifth place with NC State after two rounds, 10 shots behind leader Augusta State. The final round will be played on Tuesday on the par 71 course.

Clemson had an opening round 294 in the windy conditions on Sunday, but improved to 274 on Monday. The 274 was Clemson low gross score of the year and the 10-under par tied for the second best team round vs. par this year.

Martin is in fifth place in the individual race with a 139 score after two rounds. His 66 on Monday included six birdies and just one bogey. It tied for the low gross round by a Clemson golfer this year. Luke Hopkins, playing in his first tournament of the year, fired a 68 on Monday to support Martin. Hopkins also had six birdies, including four on the back nine when he shot a 32. He is in 29th place after two rounds.

Phillip Mollica had a solid round of 69 on Monday and is in ninth place after two rounds. He had four birdies and two bogeys in carding his round of two under par 69. Mollica stands at 141, one under par, after 36 holes.

David May, a senior from Auburn, NY, had an even par 71 on Monday that included three birdies and three bogeys. He is at 144 after two rounds, tied with Hopkins for 29th place.

Freshman Jacob Burger made a six shot improvement on Monday and had a 78. He had three birdies and four bogeys in recording his one over par 72.

Clemson is playing the event without top player Kyle Stanley, who played in the Arnold Palmer Invitational on the PGA Tour this past weekend. The Hootie at Bulls Bay concludes on Tuesday.