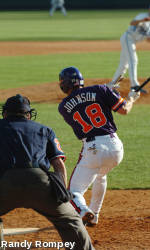 Clemson vs. Wake Forest Clemson (8-4, 1-2 ACC), ranked as high as #22 in the nation, will play host to Wake Forest (7-5, 0-3 ACC) in a three-game series at Doug Kingsmore Stadium on Friday and Saturday. Due to the threat of inclement weather over the weekend, the two teams will play a doubleheader (both nine-inning games) on Friday at 11:00 AM with approximately 30 minutes in between each conest. The series-finale is scheduled for Saturday at 2:00 PM.

The Series Clemson and Wake Forest have met 163 times on the diamond, with the Tigers holding a 115-47-1 lead in the series dating back to the 1901 season.

In 2008 at Hooks Stadium in Winston-Salem, NC, the Demon Deacons won the first two games by exactly two runs in each contest. Then in the series-finale, Clemson rallied from an 11-5 deficit to win 12-11 thanks in part to Kyle Parker’s five hits, three homers, one double, 15 total bases, five runs, and seven RBIs, including a three-run homer in the ninth inning to tie the score.

The Tigers hold a 56-18-1 lead in games played at Clemson and 44-7 advantage in games played at Doug Kingsmore Stadium. The Tigers hold a 98-35-1 lead in ACC regular-season games as well. Doug Kingsmore Stadium. Leggett was also 1-1 against the Demon Deacons as the head coach at Western Carolina, therefore he is 37-16 all-time against Wake Forest.

The Starting Pitchers In game-one, Wake Forest will start senior righthander Brad Kledzik (1-2, 8.03 ERA) on the mound. The Fairfax Station, VA native has made two starts and one relief appearance for a total of 12.1 innings pitched. He has allowed 15 hits (.306 opponents’ batting average) and seven walks with 12 strikeouts.

The Tigers will counter with senior righthander Trey Delk (1-0, 3.75 ERA) in the first game on Friday. The Elgin, SC native has made three starts for a total of 12.0 innings pitched. He has yielded 13 hits (.283 opponents’ batting average) and five walks with 10 strikeouts.

The Demon Deacons have yet to determine a starter for the second game of the series.

Clemson will start freshman lefty Chris Dwyer (1-0, 1.72 ERA) in the second game on Friday. The Swampscott, MA native has made three starts for a total of 15.2 innings pitched. He has given up six hits (.118 opponents’ batting average) and four walks with 15 strikeouts.

In game-three, Wake Forest will start junior righty Phil Negus (1-0, 4.76 ERA) on the mound. The Milford, MA native has made five relief appearances and one start for a total of 11.1 innings pitched. He has yielded 17 hits (.370 opponents’ batting average) and two walks with 10 strikeouts. The Tigers have yet to determine a starter for Saturday’s series-finale.

The Demon Deacons Wake Forest, led by fifth-year Head Coach Rick Rembielak, enters the series at #22 Clemson with a 7-5 overall record and 0-3 ACC mark after splitting a pair of midweek games. On Tuesday, Rembielak earned his 500th win as a head coach in Wake Forest’s 6-4 victory at Winthrop. Then on Wednesday, Elon topped the Demon Deacons 5-4 in Winston-Salem. Wake Forest sports a 1-1 record on opponents’ home fields this season. Wake Forest is averaging 8.3 runs per game and hitting .316 with a .522 slugging percentage and .413 on-base percentage. The team has also totaled 29 doubles, one triple, 19 home runs, and 15 stolen bases in 21 attempts.

Weldon Woodall is hitting a team-best .447 with seven doubles, two homers, and 14 RBIs. Freshman Carlos Lopez is batting .425 with seven homers and 17 RBIs, while Ryan Semeniuk is hitting .378 with five stolen bases.

The Tigers Clemson, ranked as high as #22 in the nation, enters the series against Wake Forest with an 8-4 overall record and 1-2 ACC mark after winning both midweek games over Michigan State by a combined score of 21-3. The Tigers sport a 6-2 home record but have yet to play an ACC home game this year.

The Tigers are hitting .258 with a .376 slugging percentage and .370 on-base percentage thanks to 68 walks, or 5.7 per game. Clemson has also accumulated 19 doubles, one triple, and nine home runs. The team has 21 stolen bases in 26 attempts, including a team-high seven steals by Addison Johnson.

Ben Paulsen, who already has seven multi-hit games this season, is hitting a team-best .408 with one homer and 11 RBIs. Jeff Schaus leads the team in home runs (3), RBIs (12), and on-base percentage (.520). Wilson Boyd has nine RBIs in the last four games as well.

The pitching staff has a 2.78 ERA and .280 opponents’ batting average. The staff has allowed just 33 walks against 112 strikeouts, good for a 3.4-to-1 strikeout-to-walk ratio. Casey Harman has 14 strikeouts against only two walks in 11.0 innings pitched. The team is fielding at a .968 clip as well.

Walking & Running Up in 2009 In 12 games this season, Clemson has stolen 21 bases in 26 attempts. A big reason for Clemson’s 1.8 steals per game is the nine steals the Tigers had against Charlotte in the season-opener on February 20. The Tigers were a perfect 9-9 on steals, including three by Addison Johnson and two each by three other Tigers, in that game. It was the most stolen bases by the Tigers in a game since April 19, 1989, when Clemson swiped 10 bases in a 16-5 win over Georgia Tech. Johnson leads the squad with seven stolen bases, while nine different Tigers have stolen at least one base.

Tigers Go 2-0 Against Michigan State Clemson, ranked #22 in the nation, defeated Michigan State twice in two games by a combined score of 21-3 on March 10,11. The Tigers outhit the Spartans .379 to .143 and had a .488 on-base percentage. Ben Paulsen was 4-for-8 with two doubles in the series. Wilson Boyd added three hits and six RBIs as well. The Tiger pitching staff had a 1.50 ERA and 20 strikeouts against five walks.

Eleven Tigers had a hit and 10 scored a run in Clemson’s 15-2 win over Michigan State at Doug Kingsmore Stadium on March 10. Clemson scored four runs in the first inning, capped by Wilson Boyd three-run homer. The Tigers added eight combined runs in the seventh and eighth innings. Clemson walked 10 times and struck out just three times, while four Tiger pitchers combined for six strikeouts against no walks. Will Lamb had a game-high three hits in his first career start, while Freeman and Paulsen both totaled two hits and two RBIs. Starter Justin Sarratt retired the first 13 batters and earned the win by pitching 6.0 innings of three-hit ball.

Freeman went 4-for-4 to lead Clemson to a 6-1 win over Michigan State at Fluor Field in Greenville, SC on March 11. Boyd’s two-run double in the first inning gave the Tigers the lead for good. Ben Paulsen and Boyd had two hits apiece, while Boyd totaled a game-high three RBIs. Jeff Schaus added a solo homer as well. Graham Stoneburner pitched 3.1 scoreless innings in relief with six strikeouts to earn the win. Six Tiger pitchers combined for 14 strikeouts and limited Michigan State to only four hits, including 0-for-13 with runners on base. The Spartans put 10 batters on base but could only score one run while leaving nine runners on base.