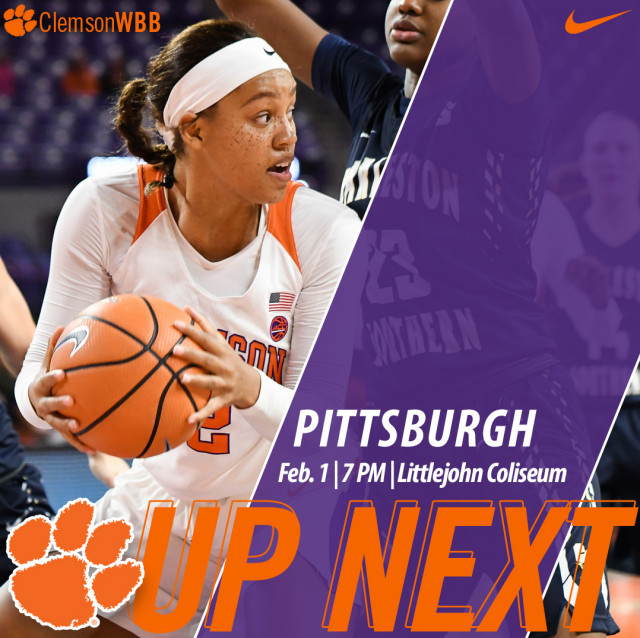 – The Tigers (11-11, 1-8 ACC) are coming off of a 62-41 loss to NC State, receiving votes in this week’s AP poll, on Jan. 28 at Littlejohn Coliseum. Sophomore Kobi Thornton and junior Danielle Edwards were in double figures in scoring with 12 and 10 points, respectively. Thornton also posted eight rebounds, while Edwards added five rebounds, four steals and two assists.

– Thornton leads the Tigers in scoring overall and in ACC play. The 2017 ACC All-Freshman Team selection is averaging 10.2 points per game on the season, and 12.6 points per game through the Tigers’ first nine ACC games.

– Edwards’ 59 steals rank third among ACC players and 24th among all players nationally. On Nov. 13, 2017, Edwards posted nine steals in the Tigers’ 56-48 win over South Carolina State, tying the Clemson record for steals in a single game. Four different players have recorded nine steals in a game previously for the Tigers, however, it had not been done in 30 years, when Ramona O’Neil picked up nine steals against Virginia on Feb. 14, 1987.

– Clemson has a 6-5 all-time record against Pittsburgh in women’s basketball.

– Last season, the Tigers defeated the Panthers, 54-46, on the road in Pittsburgh, Pa. on Feb. 9, 2017. Nelly Perry, who is currently redshirting the 2017-18 season, scored 16 points and added six rebounds, while Aliyah Collier pulled down an impressive 14 rebounds and added eight points and three steals.