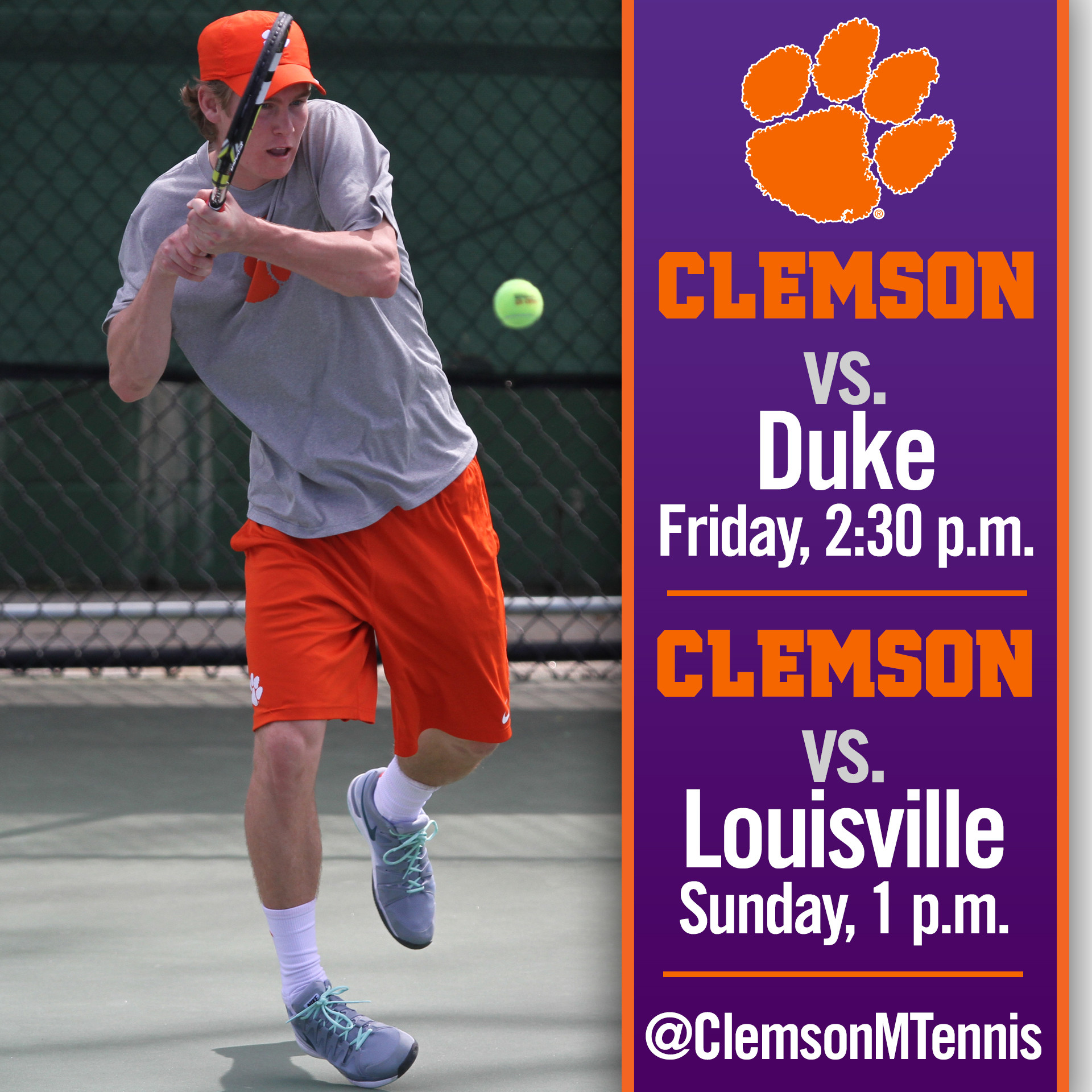 Clemson Hosts No. 4 Duke, No. 23 Louisville This Weekend

CLEMSON, S.C. – The Clemson men’s tennis team hosts a pair of ACC foes in No. 4 and No. 23 Louisville at Hoke Sloan Tennis Center this weekend. Clemson and Duke will play on Friday at 2:30 p.m. and Louisville visits on Sunday at 1 p.m. Live scoring will be available for both matches on ClemsonTigers.com and updates will be provided on Twitter @ClemsonMTennis. Friday’s match will culminate a weeklong scavenger hunt on campus for Clemson fans. Folks that have found a ball on campus this week can exchange it for a prize at Friday’s match. Clemson tennis t-shirts will be available to fans at Sunday’s match.

The Tigers are fresh off a .500 weekend in Florida with a 4-3 win over Miami on Friday, March 20 and a 6-1 setback to No. 27 Florida State on Sunday. On the season, Clemson is 10-9 overall and 1-4 in ACC play. Junior Luke Johnson is 5-1 in his last six singles matches and is also 5-1 in his last six doubles matches. Johnson and doubles partner Robert Dudley are 4-0 together this season. Last weekend, the duo fell down 2-6 to Florida State’s Michael Rinaldi and Gonzalez Mendez before rallying to win 8-6 and clinch the doubles point for the Tigers.

Scouting No. 4 DukeThe Blue Devils boast a 16-2 overall record this season and are 3-1 in ACC play. Duke is currently on a three-match winning streak featuring wins over Miami, NC State and No. 12 Wake Forest. Duke is led by Nicolas Alvarez, ranked as the 11th-best singles player in the nation this week. Jason Tahir (No. 41) and Raphael Hemmeler (No. 101) are also ranked in singles. In doubles, the duo of Alvarez and Hemmeler is currently12th in the nation.

Duke leads the overall series with Clemson 41-28. The Blue Devils have won the last seven meetings. Last season, the two teams met on April 11 at Duke, a 7-0 Blue Devil win.

Scouting No. 23 LouisvilleLouisville is 17-4 overall this season and 2-1 in ACC play. The Cardinals have won three straight matches and play at Georgia Tech Friday afternoon before heading to Clemson on Sunday. Louisville is led by Sebastian Stiefelmeyer, who is ranked fifth nationally in singles, while Albert Wagner and Alex Gornet are ranked No. 94 and No. 123, respectively. In doubles, the duo of Jeffrey Brown and Gornet is ranked No. 68 nationally.

Clemson and Louisville have met only four times in the history of the two programs, and Louisville leads the series 3-1. Most recently, Clemson hosted the Cardinals at Hoke Sloan Tennis Center on Feb. 17, 2013, a 4-0 Clemson win.