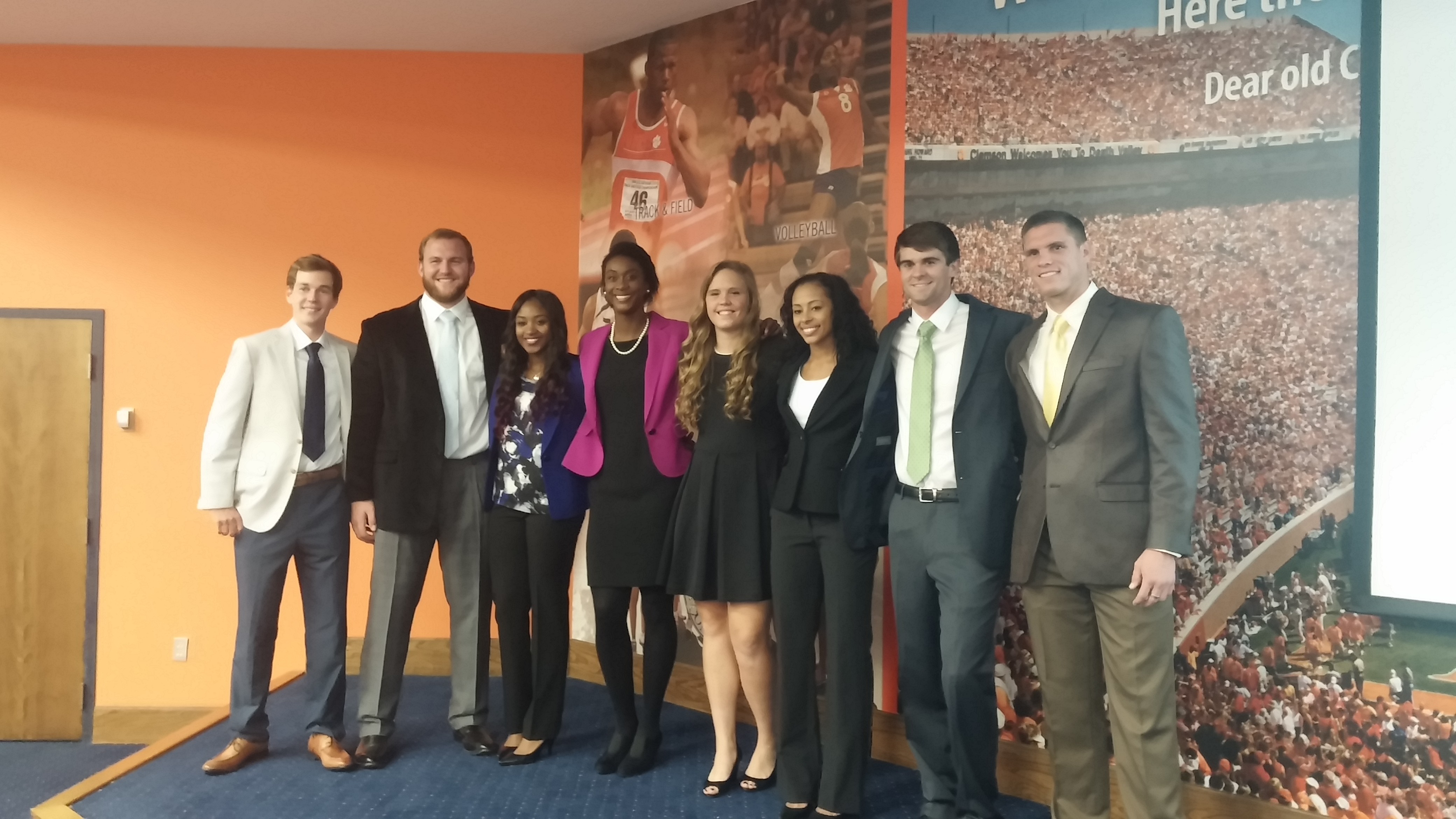 On Wednesday, junior student-athletes from Clemson’s 19 athletic programs gathered in the team room of the McFadden Buidling for a Networking Bash and Professional Attire Fashion Show. The event, hosted by the Student-Athlete Advisory Committee, helps teach student-athletes in their junior year about building the professional networks for their careers and lives once they graduate from Clemson.

The Networking Bash and Professional Attire Fashion Show is a part of a four-year progression plan for the athletes in their professional development, with this particular program focused on juniors to help prepare them for the Tiger Pro Day in February, where various kinds of businesses, alumni, and other influential individuals are invited to Clemson. They also happen to be looking to hire and employ student athletes. To help prepare Clemson’s student-athletes for successful interaction and career building after graduation is the number one goal.

“Once the student athletes go through the complete cycle from freshman through senior year, everything builds on one another. Junior year is very appropriate for this program because that’s the first year they’re going into this Tiger Pro Day, where they’re actually going to have to network and put these skills to use,” Kyra Lobbins, Assistant Director of Student-Athlete Development said.

“Last year we had Tiger Pro Day, and they loved the event and had a great time, but some of the student athletes felt that they were kind of thrown into the fire in that they didn’t necessarily know how to network,” Lobbins said. “With the feedback we received about the program, we developed this networking bash, where they actually go through different exercises to teach them better networking skills when they come into contact with potential employers, professors, and other individuals.”

The Networking Bash program included several hypothetical scenarios, from student-athletes interacting with other student-athletes from different sports they didn’t know, to meeting influential professionals and potential employers, to making as good a first impression as possible. Junior rower Alison Rehfus participated in one of these scenarios with fellow junior classmate punter Bradley Pinion in front of the entire group, where both of them pretended to interact in a business setting and received critique shortly thereafter regarding their interaction.

“It was fun to see all the athletes from here from other sports since we don’t get a lot of chances to interact with just juniors from different sports,” Rehfus said. “And it was really good practice to meet people we don’t really know. It was definitely a little bit of a challenge to be in front of a large group and meet someone I’d never met before.”

In addition to learning about networking and interacting in the field, the program also included a fashion show where students athletes modeled various clothing, illustrating what proper attire to wear in various business settings. It also incorporated some brief tips on interview etiquette and how to properly be comfortable when dressing business causal or business professional.

The junior student-athletes came out in their best dressed attire for the program, and in addition to meeting more of their own classmates, learned invaluable skills to benefit them in the workplace, exposing them to an experience outside of their respective sports.

“I thought it was a good program that got all the athletes out of their comfort zone to talk about networking and things that can help us in the future beyond sports,” Men’s Basketball guard Jordan Roper said.

“It was a great program because it really adds another dynamic to us as student athletes. We come here to play sports, and our education comes first, so being able to add that second dynamic of networking really benefits us,” Blanks said.

“I really learned how to operate in the business world. In this world, you have to know people, and the more you build your network, the greater your chances are at being successful in life.”