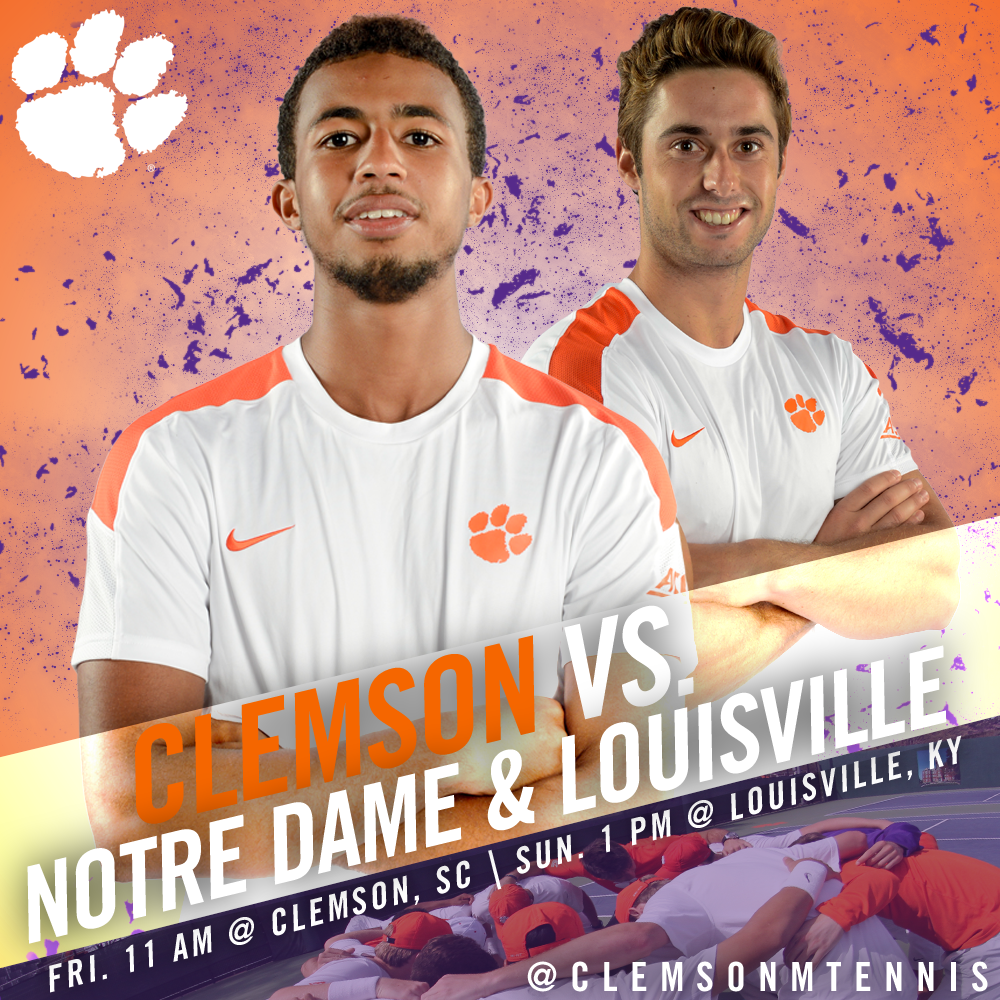 CLEMSON, S.C. – The Clemson men’s tennis team hosts Notre Dame in its second ACC match of the year. The match is set for 11 a.m. on Friday morning at Hoke Sloan Tennis Center, weather pending. Live stats will be available at https://clemsontigers.com/fls/28500/tennisstats/xlive.htm. Periodic score updates will be provided via Twitter, @ClemsonMTennis. The Tigers then travel to Louisville to face the Cardinals on Sunday, March 13 at 1 p.m. Live stats will be available at http://sidearmstats.com/louisville/mten/xlive.htm. Updates will also be provided via Twitter, @ClemsonMTennis.

The Tigers are looking to bounce back after dropping their ACC opener against Florida State. Clemson fell to the Seminoles Friday morning, 7-0, after five out of six singles matches advanced to three sets. Clemson then came back strong against South Carolina Upstate, the Tigers second match of the day, winning 4-1. Daffra Sanon and Alex Favrot teamed up for doubles to lead the Tigers, winning 6-1. Christian Harris also had a strong showing in singles play against the Spartans, clinching the match for the Tigers at No. 5, 6-4, 6-4.

Scouting Notre Dame: The 38th ranked Notre Dame men’s tennis team is 8-6 overall and 2-0 in ACC play. The Fighting Irish are led by doubles partners, Alex Lawson and Quentin Monaghan, nationally ranked 14th. Notre Dame and Clemson will be meeting for only the 3rd time on Friday morning. The current series record is 2-0 in favor of Notre Dame.

Scouting Louisville: The Cardinals of Louisville are currently 7-7 overall on the season and 0-1 in ACC play. Louisville will be in action today taking on Georgia Tech and IUPUI. The Cardinals are coming off a loss to Notre Dame this past Sunday. This will be the 7th meeting between the two teams. The most recent meeting was when Clemson upset Louisville last year in the first round of the ACC Tournament, winning 4-3.

–       First 100 fans will receive a free slice of pizza between the doubles and singles matches.