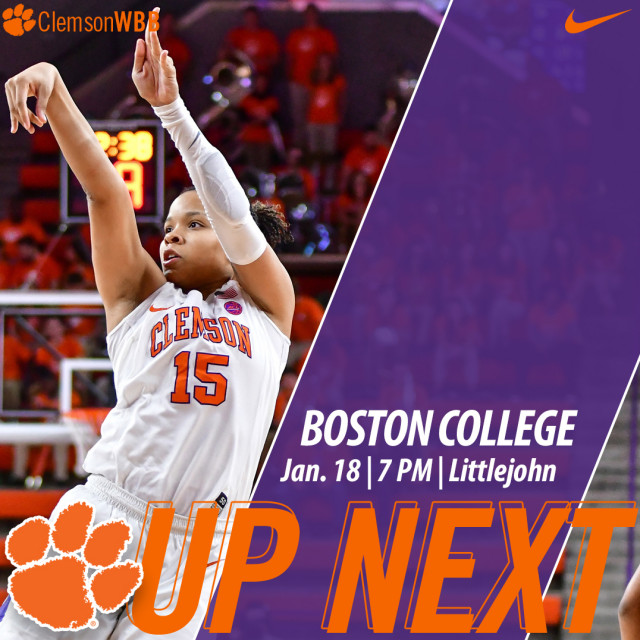 – The Tigers are 10-8 (0-5 ACC), and are coming off of a 72-60 loss to Miami at Littlejohn Coliseum on Jan. 14. Sophomores Kobi Thornton and Jaia Alexander scored 18 points apiece in the game, while junior Danielle Edwards was also in double figures in scoring with 12 points, and also added four assists and four steals in the contest.

– Clemson’s defense has held two of the nation’s top-15 teams to some of their lowest scoring outputs of the season. On Nov. 16, the Tigers held No. 9/5 South Carolina to 66 points in Littlejohn Coliseum, the Gamecocks’ second-lowest point total of the season to date. On Jan. 4, also at home at Littlejohn, Clemson held No. 13/12 Florida State to 69 points, tied for the Seminoles lowest scoring output through their first 18 games.

– Edwards’ 51 steals rank third among ACC players and 18th among all players nationally.

– The Tigers have two players in the top seven in the ACC in blocked shots. Freshman Tylar Bennett (37, 2.1 per game) is third in the ACC, while sophomore Kobi Thornton (30, 1.7 per game) is seventh in the league.

– Thornton, an ACC All-Freshman Team selection last season, is third on the Clemson team in scoring with 8.9 points per game and leads the Tigers in rebounding with a 6.8 per game average.

– Clemson has a 4-10 record all-time against Boston College, and the Eagles have won three games in a row in the series.

– The Tigers faced the Eagles on the road in their conference opener last season, on Jan. 2, 2017, and fell by a score of 60-48. Nelly Perry, the Tigers’ senior wing who is redshirting the 2017-18 season, scored 18 points and Danielle Edwards had 11 in the loss in Chestnut Hill, Mass.