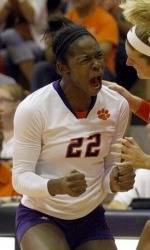 Clemson Holds on Against Maryland in Five

Alexa Rand led the defense with 12 total blocks, a season high, and her third time in the last five matches in double figures. The junior also had nine kills, falling just short of her second career double-double. Hannah Brenner had her fifth straight double-double with a season-high 46 assists and 11 digs. Mo Simmons also played one of her most well-rounded matches, tallying 13 kills, four blocks, and seven digs.

The weekend sweep was huge for Clemson, who was able to move into fourth place in the league, with one of the most challenging weekends of the year upcoming. The Tigers travel next to nationally ranked Florida State and Miami this weekend as part of a stretch of eight of the next ten on the road.

The name of the game in the first set was defense. Clemson held Maryland to just .023 hitting, and tallied eight blocks in the set, including seven from Rand, who also had three kills. The Tigers were held to just ten kills, but relied on the defensive effort to take the win.

Clemson led by as many as six at 19-13, but Maryland fought back to take a 22-21 lead. But the Tigers went to Rand, who nails a tough kill, and Rand and Yaz combined on a block to set up set point, which the Tigers got on a kill from Yaz to take a 1-0 lead.

Maryland kept the momentum going in the second set, racing out to a 16-8 advantage. Clemson went on a big run to cut the deficit to two at 18-16, but could get no closer the rest of the way. Clemson hit .333 in the set, but had trouble with the Terrapin offense, which hit .353.

Clemson clawed back to force a fifth with a 25-20 win in the fourth set, sending the match to a fifth set. Sandra Adeleye had seven kills in the set, including four straight during a 4-2 run that gave the Tigers a 22-17 lead. Clemson hit a match-high .471, and four other Tigers had two or more kills in addition to Adeleye. Rand also recorded her 10th and 11th blocks of the match, giving her double digits in three of the last five.

Clemson took the upper hand early in the fifth set, when a 4-0 run propelled them to a 10-7 lead on an ace form Faust. Maryland took the next two to cut it to 10-9, and the teams traded points until Maryland knotted at 14-14. But Mo Simmons found a spot just inside the back line on an attack and Adeleye and Faust combined on a block to clinch the match, 16-14 in the fifth set.