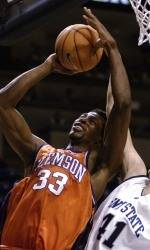 STATE COLLEGE, Pa. (AP) – Vernon Hamilton had 16 points and six assists as Clemson built a big early lead behind its 3-point shooting and transition game before holding off a late rally in a 96-88 win over Penn State on Tuesday in the ACC-Big Ten Challenge.

The Tigers (5-0) also took advantage on the offensive glass, turning several missed 3s into easy buckets to gain a 50-34 lead early in the second half.

Penn State (3-1) provided some late drama after narrowing the deficit to 94-88 in the final minute of the game thanks in part to 3s from Mike Walker and David Jackson. Clemson’s Shawan Robinson sealed the victory with two free throws.

Robinson and teammate Julius Powell had 16 points while James Mays chipped in with nine points and eight rebounds. Penn State’s Geary Claxton led all scorers with a career-high 27 points.

Penn State never led in the game but hung close to Clemson early in the first half. A Jamelle Cornley layup cut Clemson’s lead to 23-19 with just under nine minutes left in the half.

The Nittany Lions weren’t consistent on offense for much of the half, getting careless with the ball and struggling with Clemson’s pressure.

The Tigers pulled away behind some baskets inside by Akin Akingbala and a spell of hot 3-point shooting.

Julius Powell opened a 13-2 run late in the first half with a 3-pointer from the right wing. K.C. Rivers contributed two more 3s before Hamilton finished the spurt with a soft layup off the backboard to give the Tigers a 46-26 lead.

Penn State coach Ed DeChellis opened the second half with a quicker but smaller lineup that featured no player taller than the 6-foot-6 Cornley. Cliff Hammonds dashed hopes for a quick comeback by opening the half with a straightaway 3-pointer to give Clemson a 52-30 lead.