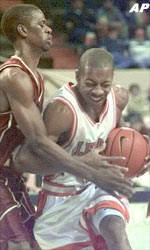 CLEMSON, S.C. (AP) – Clemson battled back from a 21-2 run by Winthrop to beat the Eagles 69-59 in a nonconference game Monday night.

The Eagles scored the final six points of the first half and opened the second half with a 15-2 run to take a 45-38 lead with 15:21 left to play. The final three baskets of the run were 3-point goals, two by Pierre Wooten and one by Derrick Knox.

With Winthrop leading 50-49, Jamar McKnight scored on a runner down the right baseline, Will Solomon rolled in a layup as the shot clock expired, and Adam Allenspach scored inside to give the Tigers a 55-50 lead with 7:50 remaining.

In the final three minutes, Tony Stockman hit two huge 3-point goals. The first one game the Tigers a 60-56 lead with 2:58 left and the second one stretched Clemson’s lead to 67-58 with 30 seconds remaining.

Allenspach led Clemson (5-1) with a game-high 20 points. Solomon added 19 and Stockman added 16 off the bench. Solomon has scored in double figures in 36 consecutive games.

Allenspach was 8-of-12 from the field and pulled down a game-high 10 rebounds.

Winthrop scored the final six points of the first half to cut its deficit to 36-30. Wooten made a 3-pointer, and Stewart scored a short jumper in the lane and made one free throw in the Eagles’ rally.

After an exchange of two baskets, Allenspach, who scored 14 points in the first half, scored inside and Stockman made a layup of a pass from Tomas Nagys to increase Clemson’s lead to 32-22.