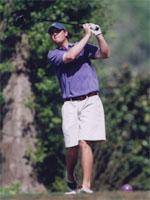 Clemson, SC – Senior Gregg Jones fired a one-under-par 69 to lead Clemson to a 287 team total and the team lead after the first round of the Fall Preview at the Cascades Course at the Homestead in Hot Springs, VA. The 15 teams were scheduled to play 36 holes on Monday, but inclement weather forced the cancellation of the second round. The tournament will finish with 18 more holes on Tuesday.

Clemson has a three-shot lead over Augusta State, who shot a 290 team score on the par 70 6,679-yard layout. North Carolina is third at 291, while Florida and Wake Forest are tied for fourth at 292. Georgia and UCLA are tied for sixth at 294, while Arizona and Georgia Tech are tied for eighth with 295 scores.

Jones led the Tigers with his one-under-par 69. His round featured two bogeys and three birdies, including a birdie four on the 17th hole. The native of Florence was one of just three players to turn in an under-par round on Monday. Kevin Silva of North Carolina fired a 68, while Kyle Reifers of Wake Forest joined Jones at 69. There were only two players at par, so just five of the 75 players had par or better. The weather was a factor as the event was played in a steady rain and 59 degree temperatures.

Brent Delahoussaye was Clemson’s second best golfer on Monday with a round of 72. The junior had nine hole scores of 36-36 and stands in 11th place. He finished strong with a birdie two on the 18th hole.

The other three Tigers in the field had rounds of 73 and are tied for 21st position in the individual race. Matt Hendrix, who was playing his first round of the year for the Tigers, had birdies on 16 and 17 coming in to finish with a three-over 73. Jack Ferguson had one birdie and four bogeys on the way to his 73 total. The junior from Seneca played the final five holes in even par.

Sophomore Brian Duncan had one bad hole that cost him a great day. Duncan shot 35 on the opening nine, including an eagle on the par five fifth hole, the only eagle of the day by a Clemson golfer. But, the native of Greenville had a quadruple bogey eight on the 12th hole and shot 38 on the back for his 73.

Clemson finished second at this event to Augusta State last year and won the title in the fall of 2001 when it was played at Ohio States. The Cascades Course will be the site of the NCAA Championship June 1-4, 2004.