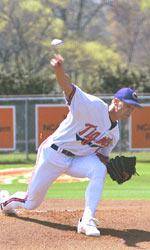 CLEMSON, SC – B.J. LaMura stopped a late Arkansas rally by striking out the only two batters he faced as Clemson held on for an 8-7 victory before a season-high 5,392 fans at Doug Kingsmore Stadium Saturday night. The Tigers pounded out 14 hits and got a strong effort from starter Matt Henrie to force a third game between the two teams in the best-of-three Super Regional to be played Sunday at 2:00 PM.

With his team down 8-5 in the ninth inning, Razorback centerfielder Michael Conner robbed Michael Johnson of a two-run home run by leaping at the fence in front of the scoreboard in right center and snagging the deep fly. It was just the first big play of the inning for Conner, who hit a two-run homer with one out in the bottom of the ninth to bring the Razorbacks to within 8-7. The Razorbacks then got another hit before Clemson Head Coach Jack Leggett went to the bullpen and LaMura. LaMura struck out Andrew Wishy on three pitches and fanned Brady Toops to close the gave and earn his first save of the year.

Henrie (12-4) pitched seven innings, allowing three earned runs on seven hits while walking two and striking out four to earn the victory. He cruised through the middle innings and did not yield a hit from the third to seventh inning. Jarrett Gardner (4-4) suffered the loss for Arkansas after giving up five runs in 5.2 innings.

Zane Green began the game with a home run to get the Tigers off to a 1-0 start. It was the second time in a week Green led off with a homer. In last Sunday’s 21-1 victory over East Carolina in the Clemson Regional Final, he took the game’s first pitch over the fence in right. Arkansas threatened in the bototm of the inning after Kirk McConnell’s leadoff triple. But next batter Scott Bridges grounded to second baseman David Slevin, who threw out McConnell at the plate. The Razorbacks loaded the bases with two outs in the second inning and took a 2-1 lead with McConnell’s two-run single up the middle.

Clemson regained the lead in the top of the third when Khalil Greene extended his hitting streak to 32 games. Greene took a 2-2 off the batters’ eye in center field for his 25th home run of the season, tying him with Jeff Baker for the new school record for home runs in a season. The Tigers tacked on to the lead in the fourth when Michael Johnson led off the frame with his 22nd home run of the season, a solo shot that extended the lead to 4-2.

A two-out double by Roberto Valiente in the sixth knocked out Arkansas’ Gardner, but reliever Kyler Pomeroy had no success in the frame. Clemson reeled off three straight hits, including RBI-singles by Jarrod Schmidt and Steve Pyzik, who broke an 0-21 slump with runners in scoring position. Schmidt added a two-run, two-out single in the seventh inning to give the Tigers an 8-2 advantage.

Arkansas rallied with four straight hits to lead off the eighth, the last of which was an RBI-single by Wishy that knocked Henrie out of the game. Jeff Hahn then took the hill for Clemson with the bases loaded and no outs, and induced a groundball out from Brady Toops that scored one run. Clay Goodwin then hit a ball to deep center that was snagged on the run by Kyle Frank. The sacrifice allowed another run to score, but Hahn recorded the final out of the inning to keep the margin 8-5 heading into the ninth inning.

Every Clemson player had a hit, led by Greene’s 3-5 performance. Schmidt led the team with three RBIs.

The two teams will play for a trip to Omaha, NE and the College World Series Sunday at 2:00 PM at Doug Kingsmore Stadium. Over 1,000 reserved and general admission tickets will be available for sale at the third base gate beginning at noon.