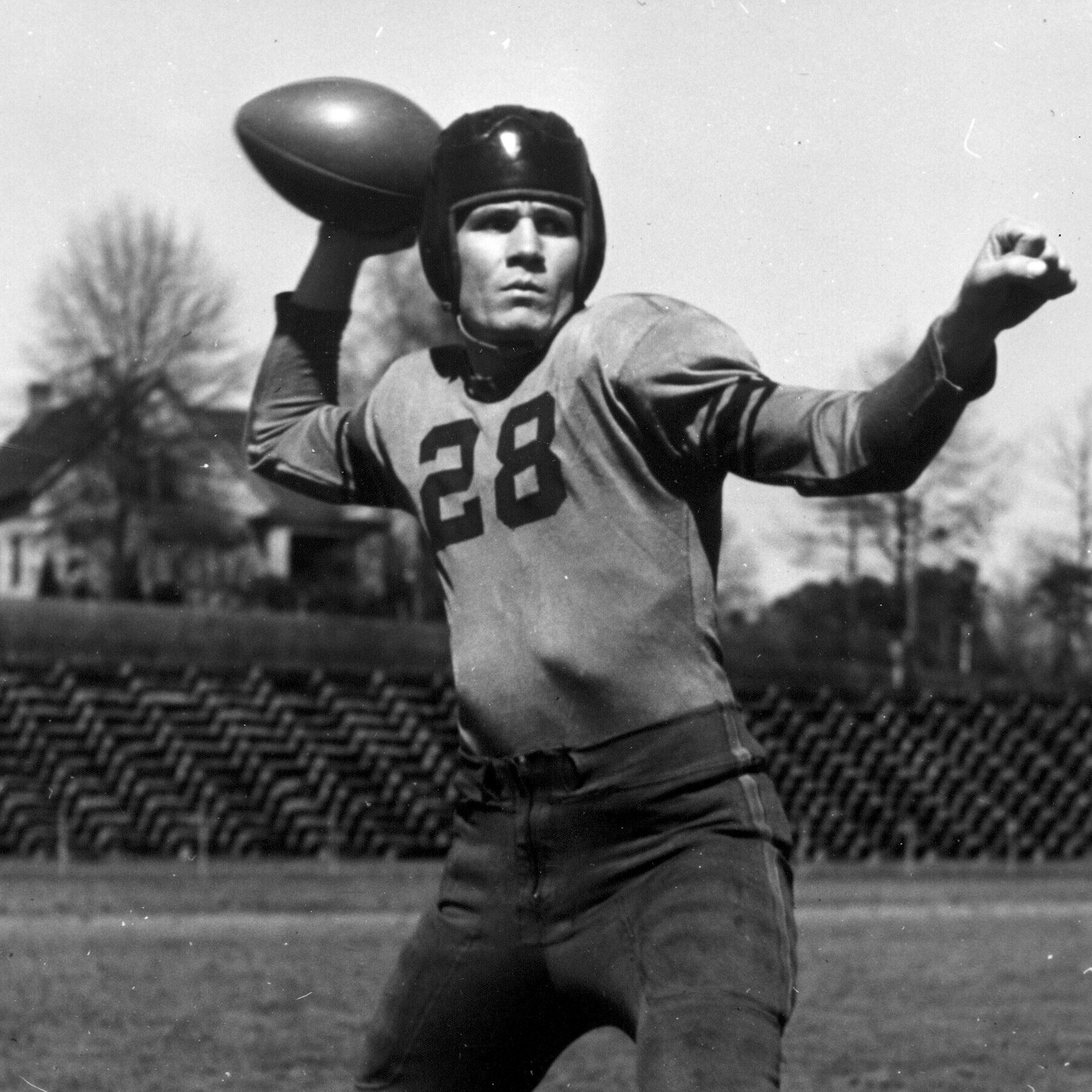 By Sam BlackmanWith Veterans Day being observed earlier this month and Clemson’s Military Appreciation Day approaching, it is important to pause, reflect and to pay honor to the brave men and women who have protected and continue to protect our freedom.  Also, we should never forget the ones who have made the supreme sacrifice in the service to our country. Clemson has had many military heroes in its history and one of those is Aubrey Rion.Aubrey Rion’s Connection to Clemson Aubrey Rion had an early connection to Clemson even before the school was founded. Aubrey’s great-grandfather, Colonel James H. Rion, went to school with John C. Calhoun’s children in Pendleton, S.C. at the Pendleton Male Academy.  The Colonel’s mother was the housekeeper at Fort Hill, the home of John C. Calhoun.  He developed a close relationship with the Calhoun family, including Calhoun’s daughter Anna Maria Calhoun Clemson and her husband, Thomas Green Clemson.  The town of Rion, SC is named for Colonel Rion who became a prominent lawyer.Aubrey’s great-grandfather was Thomas Green Clemson’s lawyer, financial advisor and close friend. Rion was a lawyer and the author of Clemson’s first will that gave the Fort Hill estate and money to start the school that is Clemson University today.   Rion passed away in 1886 of a heart attack.   Colonel Richard W. Simpson became Clemson’s lawyer, and the pair later made a few changes to the will.    Colonel Rion’s wife, Catherine, is said to have advised Clemson on the estate’s usage and helped plan some of the early buildings and their location on the Clemson College campus. It is believed that she was an architect and also enjoyed gardening and designing gardens and had a lot of experience in this area. Rion’s Early Years Aubrey Rion was an all-star athlete at Columbia High School in Columbia, SC. He and his cousin Holbrook Rion won the state championship in the 220 yard low hurdles five times.  Aubrey was also a star football player for his high school team.   His cousin Holbrook went to the University of South Carolina and Aubrey chose Clemson.“My father Holbrook thought the world of Aubrey,” said Tuck Rion, a second cousin to Aubrey.  “Aubrey had and still has a lot of influence on our family.   We talk about him and his accomplishments quite often.  He was someone you can look up too and respect.  We are very proud of him.   I even named my son after Aubrey.”Rion’s Sisters Recall Their Special Brother“He was a wonderful brother,” said Martha Alvey, Aubrey Rion’s sister.  He was an excellent student and athlete growing up. Our other brother Wallace was an excellent student as well.  Aubrey loved athletics and excelled at them.   You couldn’t have asked for two better brothers.  I was very close to Aubrey and was very proud of him.”“There is no doubt about it, Aubrey loved Clemson,” said Alvey.  “When he first started at Clemson he wanted to be a doctor.  He was preparing for that field and was going to medical school after Clemson, but World War II changed all that. He used to take me to the Clemson dances, and I would meet his friends and they would be in their Clemson uniforms.  He met his wife Janette at one of the dances they used to have. He was a good dancer and was very popular with the ladies,” said Alvey.“He was very special.”

“He was the best brother, friend, son, and husband there was,” said Rion’s sister Mary Wittenberg.  Anyone that knew him always considered him their favorite. He was good to everyone.  His death devastated our family.”    Three-Sport Athlete at Clemson One of the football teams that helped put Clemson on the national radar was the 1939 team.  At that time the Tigers were experiencing a special year. The school won the Southern Conference basketball and swimming championships on the same day on March 4th.  Both events were unexpected as both teams were not favored.  It was one of the greatest days in Clemson athletic history.During that time World War II was starting. The Clemson cadets probably had in their minds that they may have to serve later. But at that time, they were focused on school and working hard to obtain a degree. It was a special time at Clemson as the athletic teams were doing so well. It was towards the end of the Great Depression and the Clemson campus was growing. It was an exciting time, but still an anxious time as the events of the world were so uncertain.   In the fall, it was the football team’s time to grab the headlines.  The 1939 team was a bright spot for the student body and alumni as Clemson went through the season with an 8-1 record. The Cotton Bowl issued a bid to the Tigers and was gladly accepted. This was a big-time bowl inviting Clemson to the limelight of the New Year. It was a first for Clemson and the state.Many of the Clemson players were from the state of South Carolina including Rion.   He was a junior that season and was a backup tailback to the legendary Banks McFadden.  He was in great company as stars like Joe Blalock, Bob Sharpe, Walter Cox, Shad Bryant, and Charlie Timmons and Joe Payne. Rion averaged 4.0 yards per carry and scored two touchdowns that season, one against South Carolina and the other against Southwestern.  In his senior season, Frank Howard became the coach of the Tigers. In that season, the Tigers won the Southern Conference Championship with an undefeated league record.In probably the best game of his career, Rion scored two touchdowns in the N.C. State game in 1940 at Memorial Stadium in Charlotte, NC.  He led the team in scoring that year with 28 points and averaged 3.5 yards a carry.  Rion scored the winning touchdown against Furman on November 23, 1940 (74 years ago this Sunday) that gave Clemson the Southern Conference title with the 13-7 victory.Rion was a three-sport athlete at Clemson. He was a boxer for the Tigers and a member of the 1940 Southern Conference Championship team.  He was also a member of the Tiger track team running the 100 and 220 yard dashes.On February 15, 1941 Rion graduated early from Clemson with a degree in general science. He is a member of the prestigious Tiger Brotherhood (an honorary fraternity that is unique only to Clemson) the Columbia-Clemson Club, Block C Club, and the Sigma Tau Epsilon fraternity.   The American DreamLike many others, Rion was living the American Dream. He graduated from Clemson, been a star athlete, and met his future wife at a dance that was held at Clemson. Everything was looking up for Rion and his future seemed bright.   He got a job at Bennettsville (SC) High School as a teacher and coach.    He married Janette Stevenson on July 16, 1941 in Georgetown, SC. World War IIOn December 7, 1941, the Japanese bombed Pearl Harbor and the United States was drawn into the second World War. Rion volunteered for service on June 30, 1942, less than two years after his final appearance on the Clemson gridiron and only six months after Pearl Harbor. Rion was stationed at Fort Benning, GA for infantry training.   He was an instructor at the Infantry School for one year and was transferred to the Parachute Infantry in 1944. He volunteered to go overseas in October, 1944 because many of his men that he taught were going overseas. As a member of the 501st Airborne of the 101st Division, he saw action in Holland in November of that year.   On June 6, 1944 the Allies landed on the beaches on Normandy, beginning the offensive to push the Germans out of western Europe and put an end to World War II.  Another big event for Rion was the birth of his son Aubrey, Jr. on June 17. Early on the morning of December 16, the Germans launched their last major offensive as an attempt to reach the American and the Allies’ supply depots and ports.  It would become known as the infamous Battle of the Bulge.  The next day, the 101st Airborne Division and Rion’s Regiment were ordered to the Belgian cross roads of Bastogne, a key road junction in the path of the Germans’ attack.  The Allies refused to surrender to the Germans and held off  Gerd Von Rundstedt’s attack until help came.  Rion’s 501st regiment was the first to come in contact with the Germans.   The 501st regiment fought bravely and did not lose any ground. By Christmas the weather had cleared and it allowed air strikes and General George Patton’s Third Army reached the tired and embattled 101st Air Borne Division.  The Tragedy of WarRion did not live to see the victory as he was killed by a sniper’s bullet on December 20. He was one of 580 paratroopers killed, wounded, or captured from Rion’s Regiment.  Rion saw one of his men wounded, and went to his aid.  He picked up the wounded soldier and tried to carry him to safety, and that is when he was shot by the German sniper.Winning this battle was the beginning of the end for the Germans.Aubrey Rion, a first lieutenant, was awarded the Purple Heart. He was survived by his wife Janette and son Aubrey and is buried at the Luxembourg American Cemetery not far from General George Patton’s grave.Rion is one of almost 500 Clemson Alumni who made the ultimate sacrifice for their country.  Their service and sacrifice should always be remembered.