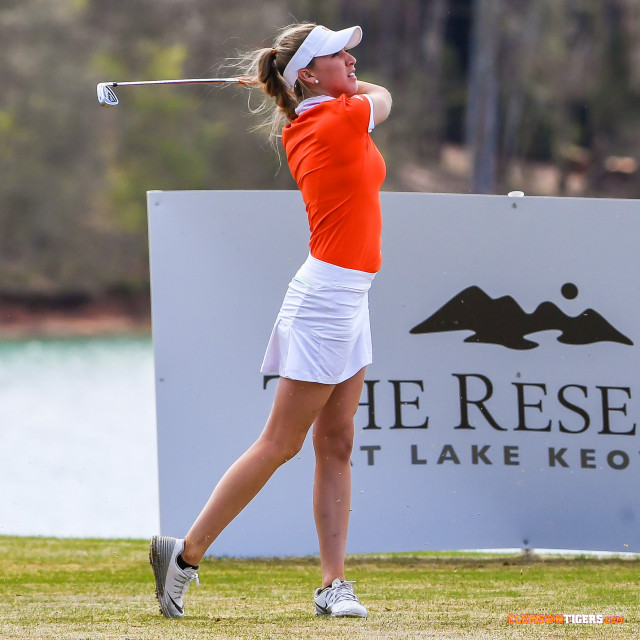 Clemson Heads to The Dickson

Clemson, S.C.—The Clemson women’s golf team returns to the course Monday at The Dickson, a 54-hole, two-day tournament at the Woodlands Country Club in The Woodlands, Texas. The Tigers will join Florida State as the only ACC teams in the 17-team field from nine different states. The field includes top 25 teams from Houston, Iowa State, and Kent State.

Clemson will take a team composed of two seniors, two sophomores and a junior.   Alice Hewson has the top stroke average for Clemson entering this event, the sixth team event of the year for Kelley Hester’s team. Hewson has a 72.07 stroke average with three top 10 finishes, four rounds in the 60s and seven rounds under-par among her 14 rounds.

Ana Paula Valdes is second on the team in stroke average with a 73.00 figure. The sophomore from Mexico has five under-par rounds this year, including a pair of rounds in the 60s.

Sydney Legacy and Marisa Messana are two seniors in the Clemson lineup. Legacy has a 76.20 stroke average, while Messana is at 76.77. The first round on Monday will be the 100th career round for Messana   She will join former teammate Jessica Hoang as the only Clemson golfers to play at least 100 rounds

Kennedy Swann, a native Texan, will also be in the Clemson lineup. The native of Austin has a 75.90 stroke average this year and has two rounds under-par, both in the 60s.