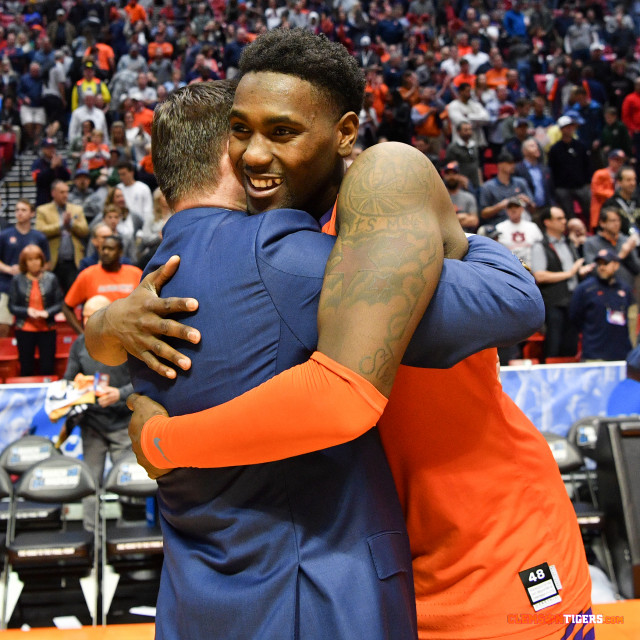 Clemson Heads To Sweet 16 With Record-Setting Win Over Auburn

“I told the team before we started here that we had just played 20 games against teams in a great league,” said Tiger head coach Brad Brownell. “I thought we were prepared for anything based on what we had done.

“The team was bouncing off the ceiling to play before the first game (against New Mexico State), but today there was a calm about them in the locker room. We were focused from the beginning, and after we made some corrections in defensive rebounding, we were in good shape.”

DeVoe scored 22 points in each of the two games in San Diego and has eight games of 20+ points this year, including seven in his last 14. He became the first Tiger to have consecutive 20-point games in one NCAA Tournament since Elden Campbell in 1989.

DeVoe made 6-9 three-point attempts, a record for made threes by a Tiger in an NCAA Tournament game.

Thomas made 7-10 shots from the field on the way to his 18-point game, and it was his ninth double-double of the season. Marcquise Reeded at 16 points and seven rebounds, while Shelton Mitchell added 10 points, six rebounds and six assists.

The Tigers dominated the game in every fashion, as they outrebounded Auburn 50-32, had 19 assists against just seven turnovers and held Auburn to 26-percent shooting from the field, including 22 percent on three-point attempts.

Clemson advances to face Kansas in Omaha, Neb., on Friday at 7:07 p.m., on CBS. It marks the first meeting between the two teams.