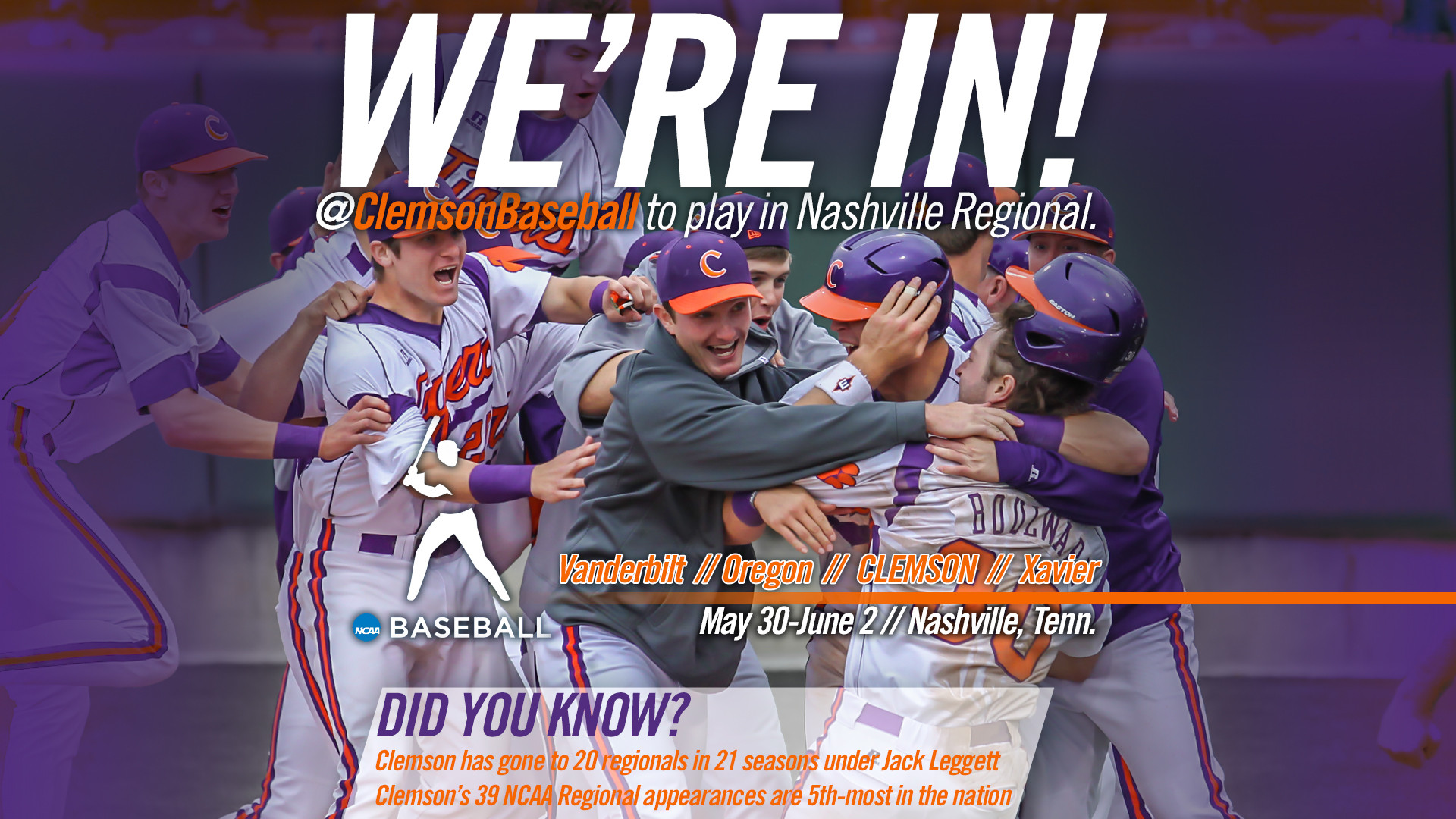 CLEMSON, S.C. – Clemson was selected for the NCAA Baseball Tournament for the 39th time, fifth-most in Division I college baseball history, Monday afternoon. The No. 3 seed Tigers travel to Nashville, Tenn. to play No. 2 seed Oregon in the first round Friday at 1 p.m. EDT. No. 1 seed Vanderbilt hosts the regional and plays No. 4 seed Xavier in the other first-round game Friday night. The tournament will be played Friday, Saturday and Sunday with an if-necessary game on Monday.

This will be the first baseball game for the Tigers against Oregon and the first time Clemson has faced a Pac-12 team since 2010, when Clemson defeated Arizona State 6-3 in the first game of the College World Series.

Clemson has never played Xavier and has faced Vanderbilt three times, just once in Nashville. Clemson closed its 1984 season with an 11-5 win at Vanderbilt. The two teams split two games at Clemson in 1986.

Vanderbilt enters the NCAA Tournament with a 41-18 record, including a 23-3 mark in non-conference games and 26-9 at home. The Commodores are coached by former Clemson Assistant Coach Tim Corbin, who coached under Clemson Head Coach Jack Leggett from 1994-02.

Oregon has a 42-18 record, a 24-6 record in non-conference play, and an 18-10 record away from home. The Ducks are 23rd in the RPI and had an 18-12 record in the Pac-12. Offensively, Oregon is led by Shaun Chase, who has 12 home runs. Jeff Gold and Thomas Thorpe both have 10 wins to lead the pitching staff. Gold is eighth in the nation in strikeout-to-walk ratio.

Xavier won the Big East Tournament Championship with 5-0 victory over Creighton in the title game. The Musketeers enter the NCAA Tournament with a 29-27 record, including a 17-16 mark in non-conference play.

This is the 20th NCAA Tournament selection for the Tigers in the 21 years Leggett has been the head coach. Clemson has won at least one NCAA Tournament game in each of the 20 appearances under Leggett and 26 consecutive tournaments overall, the fourth-longest active streak in college baseball.

Clemson enters the tournament with a 36-23 record, including a 2-1 record in the recently-completed ACC Tournament in Greensboro, N.C. One of Clemson’s wins was a 3-2 victory over No. 3 Miami (Fla.). Clemson has won 11 of its last 15 games entering the regional.

The Tigers have three .300 hitters and are led by designated hitter Tyler Krieger, who has a .330 batting average with 16 doubles and 32 RBIs. Second-baseman Steve Wilkerson is a .318 hitter with a team-high 18 doubles and five home runs to go with 39 RBIs, while Garrett Boulware is a .303 hitter. Freshman catcher Chris Okey leads the team in RBIs with 41.

Daniel Gossett leads Clemson’s pitching staff with a 7-1 record, 102 strikeouts and a 1.78 ERA. He is on pace to have the best ERA by a Clemson pitcher since 1998. Matthew Crownover leads the team in wins with an 8-5 record and a 2.26 ERA. Matt Campbell has been the closer in the bullpen with a 4-0 record and an 0.87 ERA to go with eight saves.

Ticket InformationTiger fans who wish to purchase ticket books for the Nashville Regional can do so HERE. The Vanderbilt ticket office at McGugin Center will be open for walk-up sales and phone orders at 615-322-GOLD (4653). Ticket books will be located in the outfield seats. The ticket price is $80.Tickets for single games for the Nashville Regional will be available for purchase beginning Wednesday. Ticket prices are $15 for adults and $12 for youth. Availability is limited for single-game tickets.Tickets purchased in advance will be available at the McGugin Center box office, across the street from Hawkins Field, beginning Wednesday afternoon.