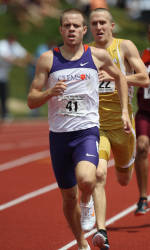 CLEMSON, SC – Clemson will head west to Des Moines, IA and Drake University for the 2012 NCAA Outdoor Track & Field Championships. The four-day meet will be held June 6-9 at Drake Stadium. The Tigers have traveled 14 members of the No. 5 ranked women’s team and four student-athletes from the men’s program to compete for championships this week. It is the second straight year the NCAA outdoor national meet has been held in Des Moines.

Live video coverage of the event will be available each day on NCAA.com and Thursday through Saturday on ESPN3. The championships will also be televised by ESPNU on Saturday at noon.

The Tiger women’s team finished seventh at this meet a year ago, tied for the program’s best NCAA outdoor finish. This season, Clemson qualified females in eight individual events and both relays. The most athletes in a single event is the 100 hurdles, which will feature four Clemson entries – more than any other school. Clemson’s women also have an athlete in the 100, 200, 400, steeplechase, 400 hurdles, pole vault and triple jump.

Monique Gracia and Keni Harrison both qualified in multiple events for the Tiger women – Gracia in the 100 and 100 hurdles, and Harrison in the 100 hurdles and 400 hurdles. Harrison is one of only two athletes to qualify in both hurdle events this week.

The men’s team qualified two athletes, Spencer Adams and Marcus Maxey, in the 110 hurdles. Adams was an indoor All-American after a fifth-place finish, while Maxey is making his NCAA Championships debut this week.

Also for the men, Warren Fraser will compete in the 100 and Chris Slate qualified in the 800. Slate is Clemson’s first male athlete to qualify in that event since Davidson Gill in 1999.

The first action of the week will be Wednesday, June 6 with the women’s 4×100 relay semifinal at 5:45 PM (Central time). Also scheduled for Wednesday will be the semifinals for the women’s 400 dash and 3000 steeplechase, featuring championship contenders Marlena Wesh and Alyssa Kulik, respectively. Wesh owns the nation’s top seed time, while Kulik was an All-American in the steeple last season.